Sunday (or day #5) of our trip was a free day – time we could spend however we wished.  The start of my day consisted of going to a flea market in Paris – Marche aux Puces de la Porte de Vanves. 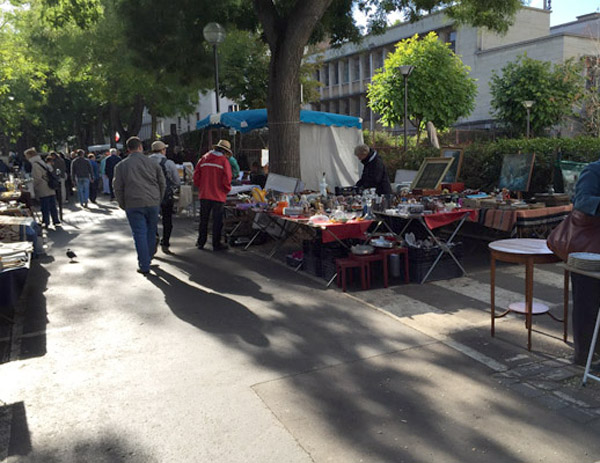 While I said I wouldn’t need to split up my blog posts of my days in France – I took far too many photos for this one day.  After seeing the next posting of day 5, I think you’ll see why.  :D

I tried to do as much research as I could prior to leaving on this trip.  When I last looked, the flea market was scheduled to start at 7am on Sunday.  Well… I arrived a bit late or at 7:30am and saw this much to my dismay.

A near empty street: 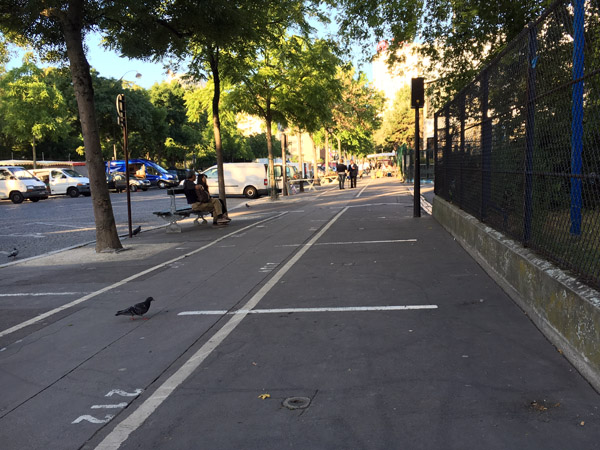 I should have known… in the summer months they start later.  Ugh, I woke up early for nothing!  Precious, precious sleep lost.

I knew the flea was still taking place as I spotted vans here and there packed with goods.  I just realized I arrived much to early.

Not sure how to kill time, I decided to take a long walk around the neighborhood and spotted this bit of loveliness: 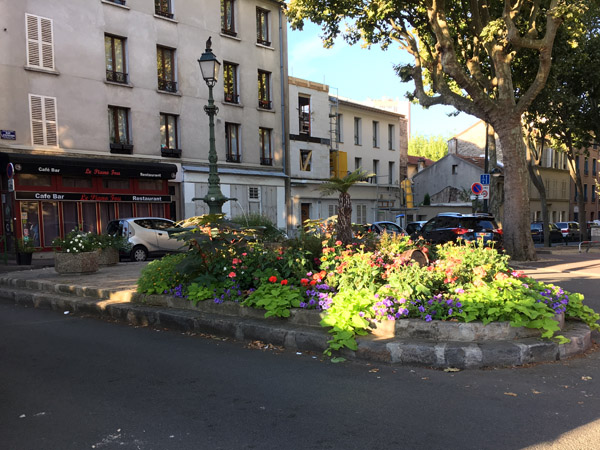 Keep in mind, I was pretty much the only person walking around the neighborhood at this time of day – which was a bit eerie.  I wandered back to the flea area and found a cafe to kill some additional time in.  I took my time sipping my cafe au lait and people watched.  Turns out the flea opens more like 9am in August.  lol

After seeing all of the vendors rushing out of the cafe themselves for the opening bell, I figured it was time to get shopping myself. 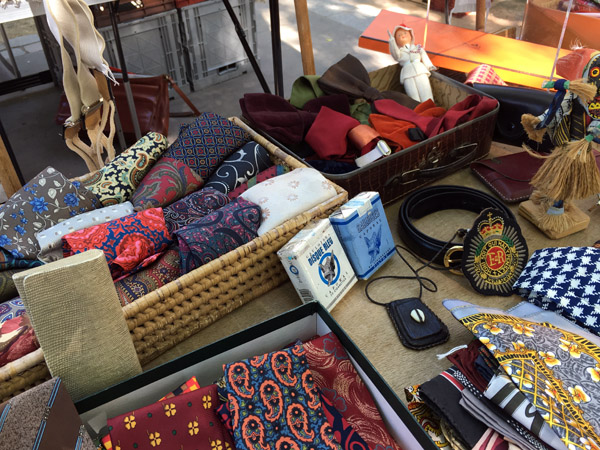 I happened upon several vendors that I remembered from last September and even saw some of the same buttons as I did before, which was pretty funny. 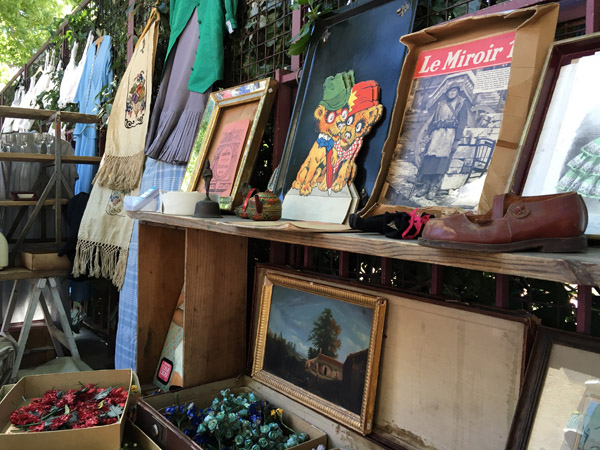 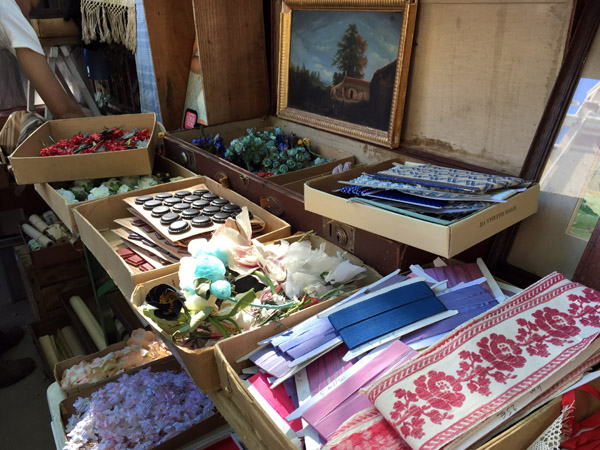 Fun little mushroom table & stool set.  Just behind that, there was a bathroom sink and fixtures from the 30’s or 40’s that I was drooling over. 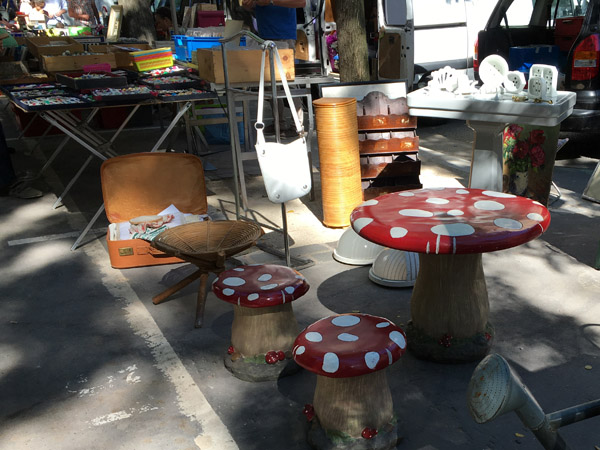 There’s always something I kick myself at – wishing I would have purchased.  This time around I wish I had inquired about the prices of these vintage makeup items (boxes with vintage lipsticks and such): 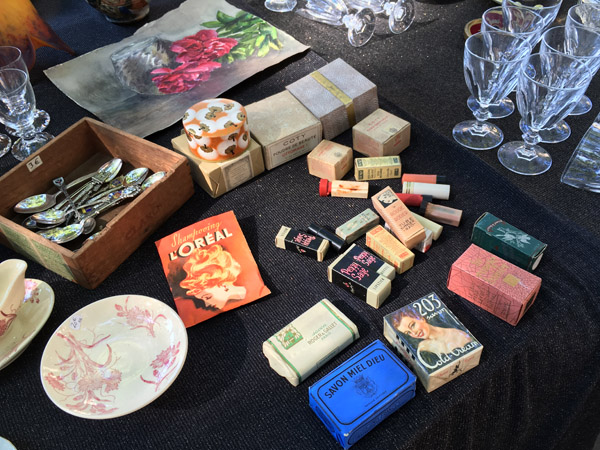 I love a good Hoosier cabinet – and then noticed the singer sewing table base below. 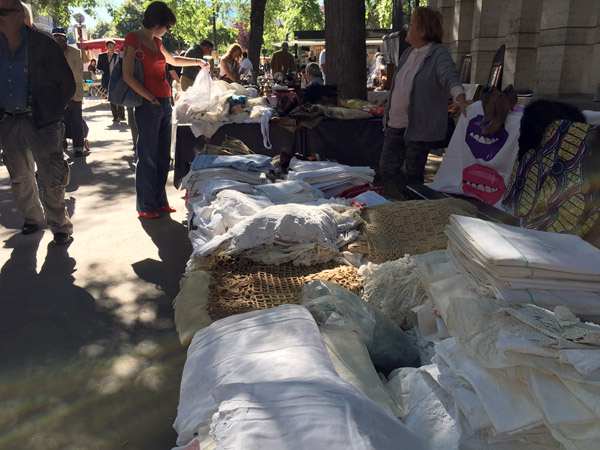 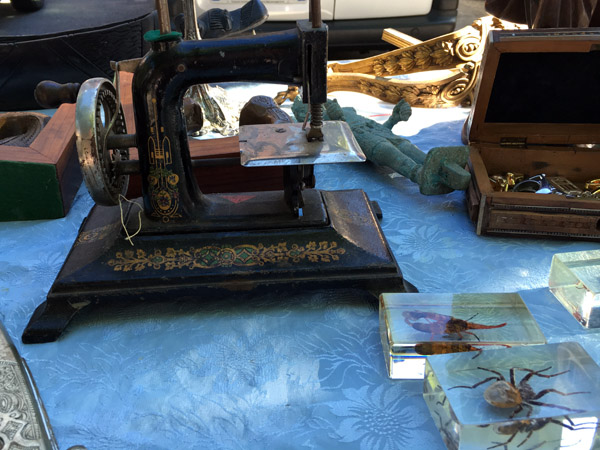 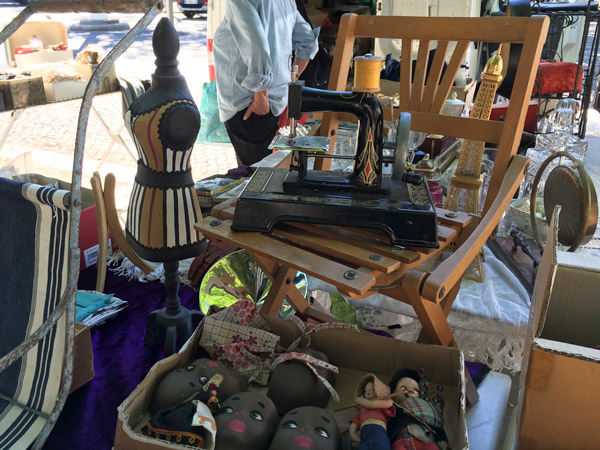 I have no idea what was happening here!  I passed by this area twice and looked in.  Each time there was a long gaggle of people, watching a man taking items off his truck.  I didn’t see anything he had was out of the ordinary – but yet this hoard of people.  Perhaps he’s know for having treasures… 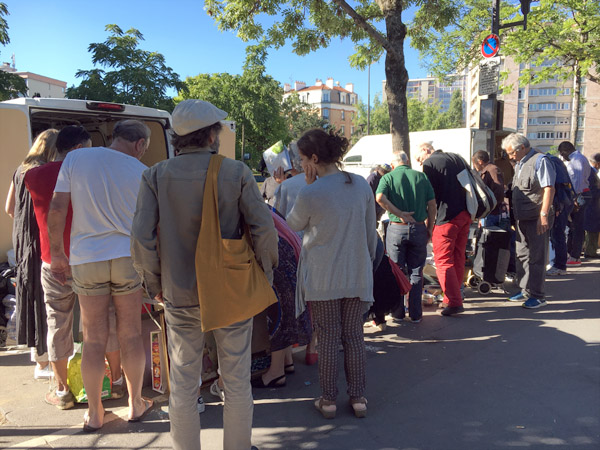 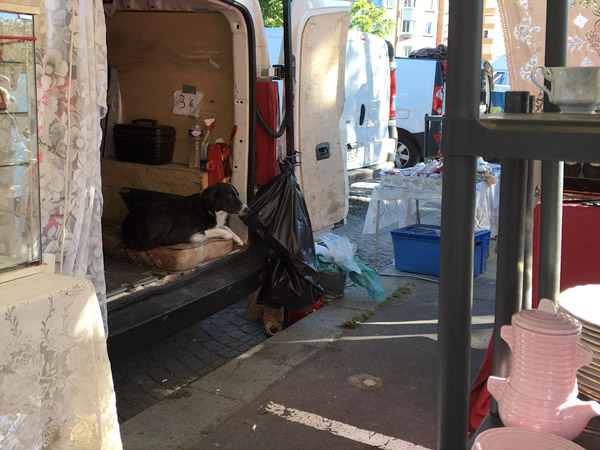 I remembered I bought a piece of fabric from this vendor last year ( a 40’s rayon), so I spent a great deal of time digging through her boxes and such.  I really loved that little brown polka dot dress on the far right – but didn’t inquire as the waistline looked too petite for me. 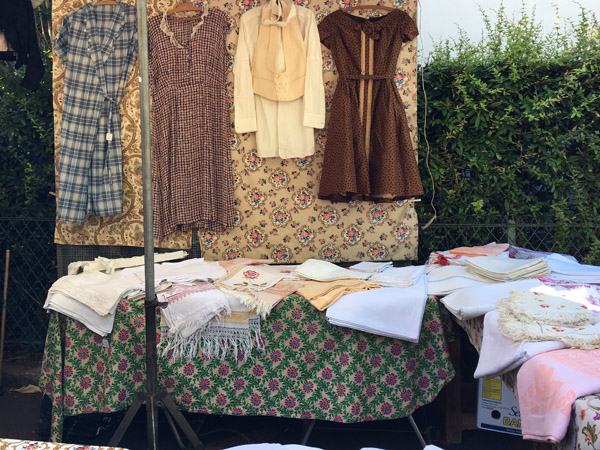 Boxes I was digging through: 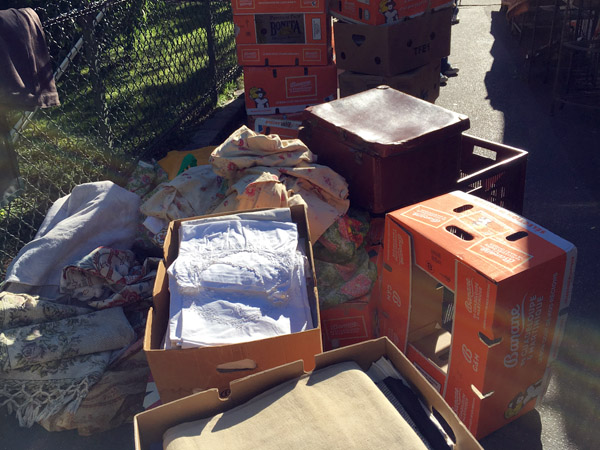 And now we’ve come to the buttons!!!  Last year I was kicking myself b/c I didn’t purchase enough buttons.  I wasn’t going to make the mistake again this year and also… I found a gentleman here who had TONS OF BUTTONS! 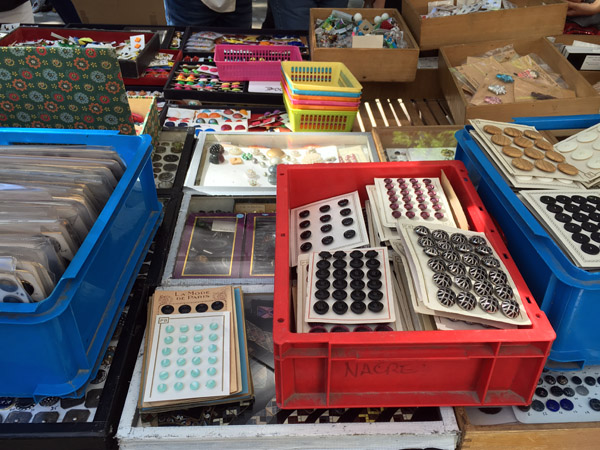 He had the more expensive ones in front and I started digging through his stash not finding much I wanted that that high price (20 Euro for a card).  But the gentleman could tell I was interested and he started pulling out crate after crate of buttons for me to dig through.

This is his trunk!  And he said this is just a SMALL fraction of the new, old stock he has in his house. 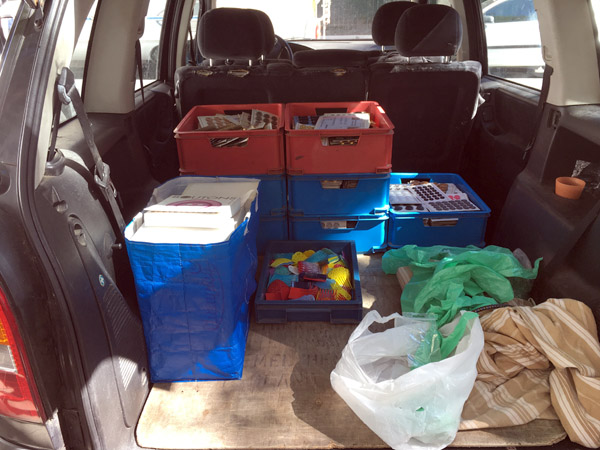 You can be sure I got his business card!  lol 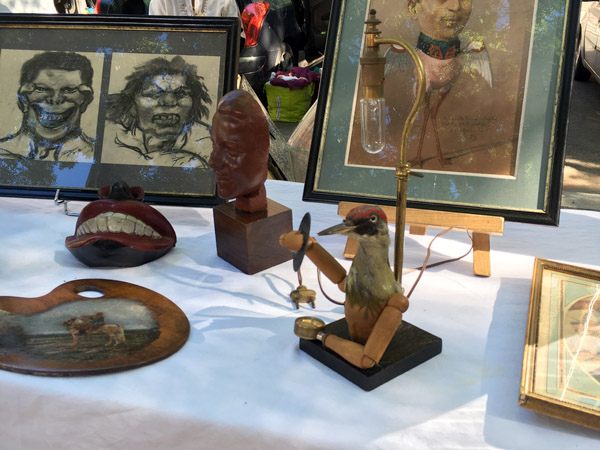 On my last walk through I saw this little ceramic bunny from the 30’s.  I took a picture (with permission) and asked how much.  It was about 10 Euros more than I cared to spend, so I walked away. 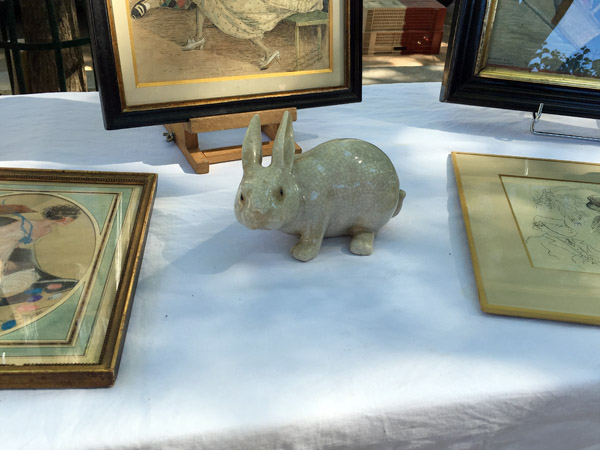 About 10 minutes after I had walked away from this little guy… I found I couldn’t stop thinking about him, languishing the idea that someone, who wasn’t me, would take him home.  So back I went.  I attempted to haggle but the guy told me how much he paid to acquire him.  Understanding his need to make a little cash from the exchange, I ended up paying his price.  He just had to come home with me!  #NoRegrets

These are just some of my buttons.  :D But you can see I got two 50’s French vintage patterns and some seam binding, as well as the ceramic bunny and buttons. 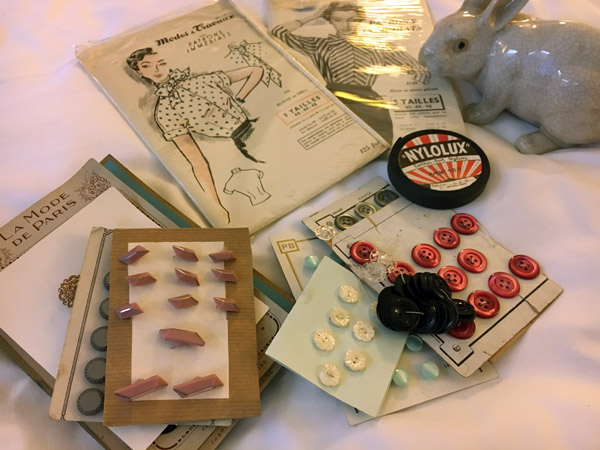 I can say now that the bunny made it home in one piece – as I checked my bag with him inside (wrapped in my newly acquired fabrics of course).

Upon reflection, the flea market day made my top 2 days in France on this trip.

As I was shopping around the flea, solo, I kept bumping into the same French woman – booth after booth.  We were both shopping around for sewing notions and the like.  While she was on the hunt for some specific white lace trim for a late 1800’s gown she was working on I was shopping around for well… anything vintage that caught my eye.  The more I bumped into her the more we got to chatting.  She started telling me about all of the pop-up vintage shops that were coming up as well as particular antique shops she thought I would like.

There was a bit of a language barrier, but on the whole her English was great and we communicated just fine.  This coupled with the lovely button gentleman who went so far as to offer up his house for my perusal (in a non-creepy way of course) marked how generous and kind French people really are, if you take the time to get to know them.

It was simple conversation and pleasantries with the vendors and other shoppers who made my morning a memorable one.

Thanks for stopping by & stay tuned for the second half of my day! 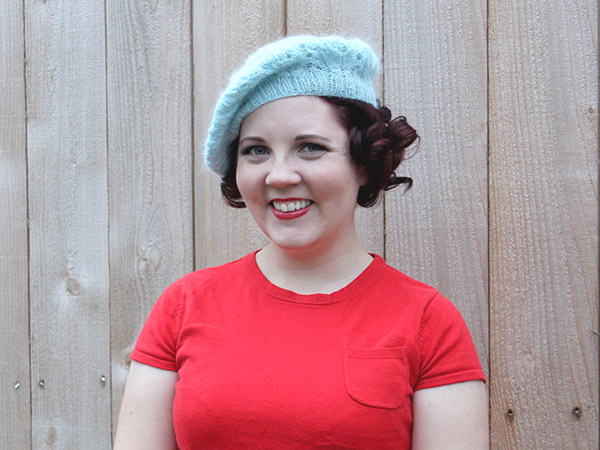 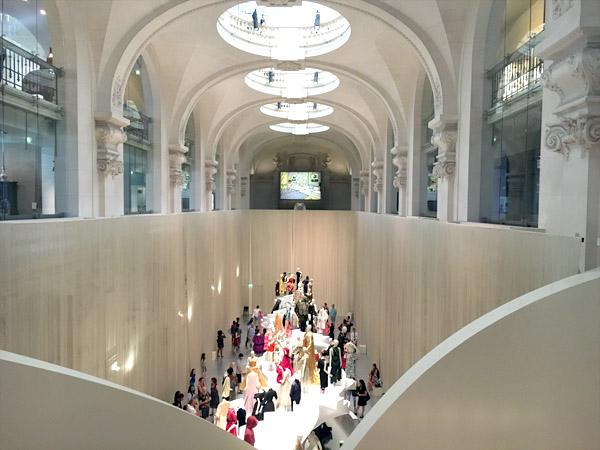 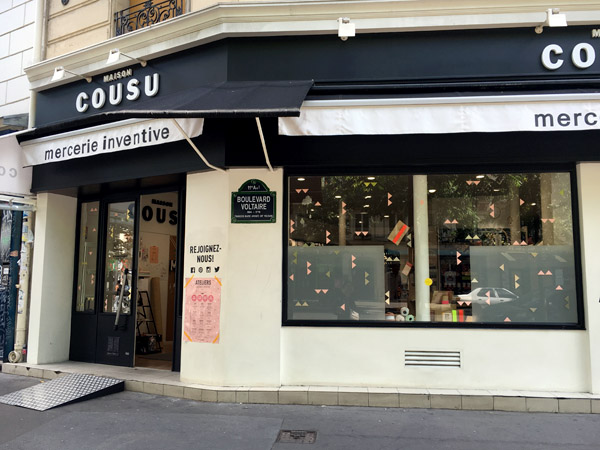