Once again, I am totally pooped after my weekend.  I need a weekend after my weekend to catch up on my sleep and recharge.  I even had coffee this morning just so I could work, while at work.

I fully intend to take a nap after work today and perhaps do a bit of movie watching/knitting if my energy level improves – chocolate may be in order also.  heh

So… why am I so sluggish today?  Well, I dug a giant pit in my basement (along with my dad and Felix). 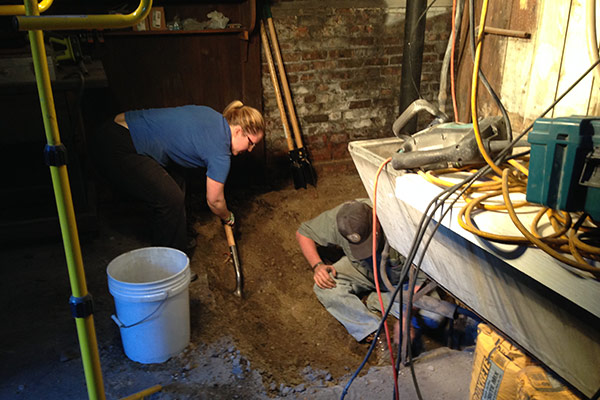 Same old work clothes as the last post I realize… I only have so many crappy T’s and pants in my wardrobe.

Bob worked at jack hammering out the top layer of concrete in our basement floor. 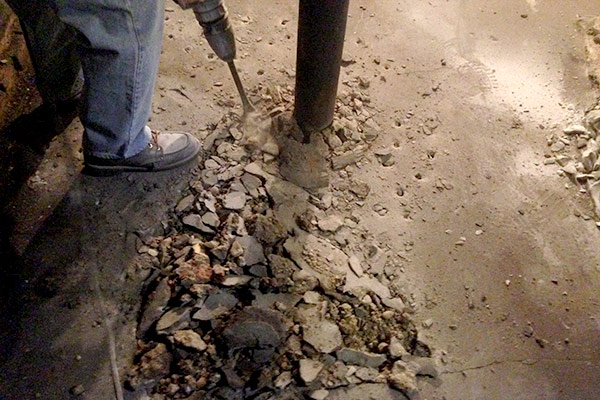 Then Felix and I loaded up the large, broken up pieces in buckets and dumped it outside in a pile. 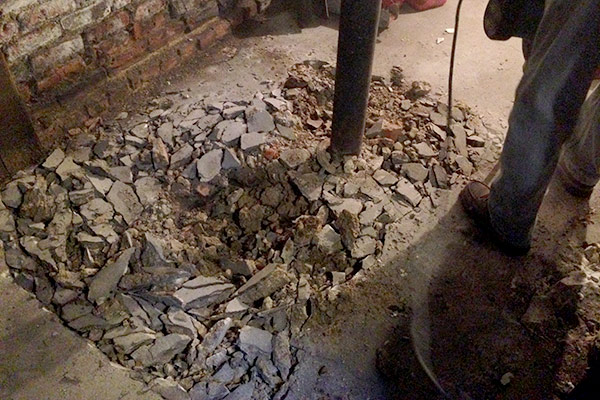 Then we set about digging out the sand. 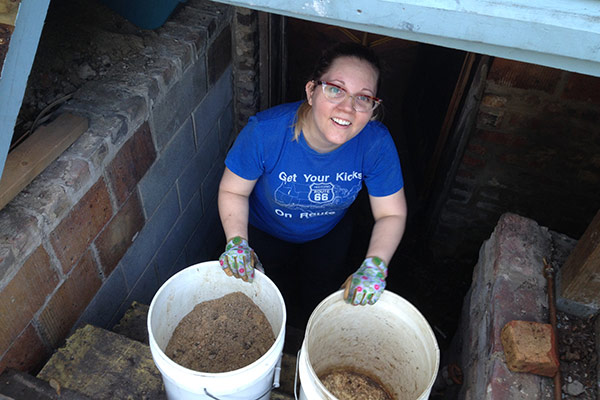 (Not the most glamorous of photos of me…)

I believe we started somewhere around 1pm and finished up around 7pm.  I admit, it’s not quite a full day’s worth of work.  But three large shovel loads was all I could handle in the bucket to lift it up the basement stairs and hand it off to Felix to dump in the backyard.  Damp sand is HEAVY! 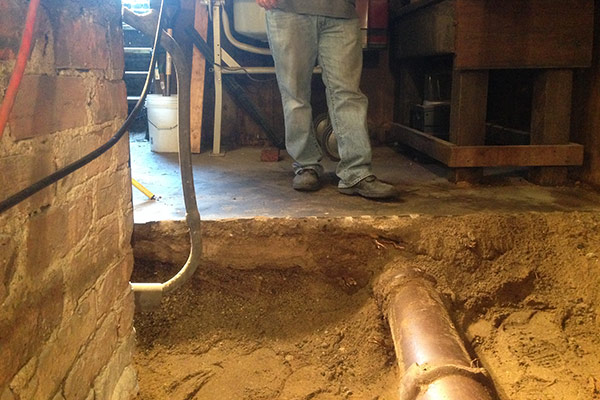 Surprisingly, I’m not at all sore from the work just fatigued, overall. 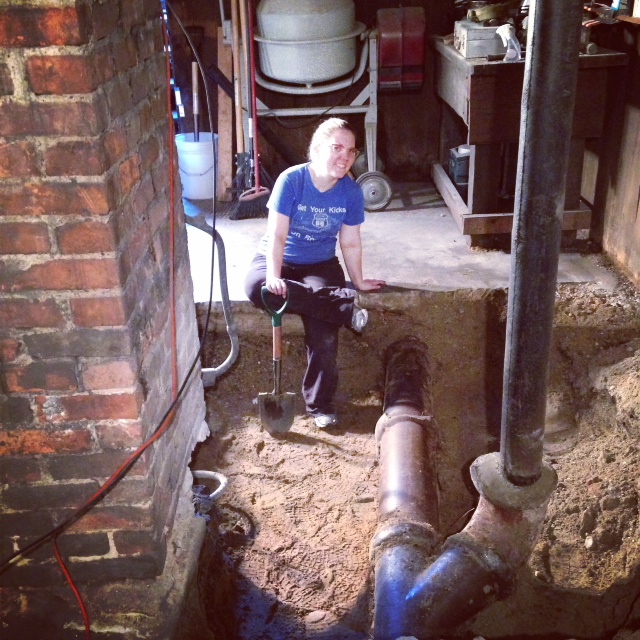 (via Instagram).  This gives a much better sense at just how deep we dug.

I guess the thing you’ve all been wondering is “Why?!?!”

Well… the long and short of it is, we’re redoing all of the plumbing lines in the house.  Which is going to be awesome!  :D  It’s a bit scary that I get jazzed up about rebuilding the house’s infrastructure.  It’s going to be so nice to not have to worry about any breakage or repair when we’re all done.  It’ll be like we have a brand new, 1885 Victorian cottage.

First off, this giant, vertical pipe on the right is the waste line.  This is going to be moved much closer to the wall, instead of being right in the walkway.  So we had to dig all the way down so the plumber could do his thing.

I can’t imagine paying a plumber $50 an hour to do all of this digging himself, just so he could get to the lines to start his work.  This took 3 of us 6 hours, so if it took the plumber 18 hours to do the same digging, this one thing alone would cost us $900 – just for labor on this portion.

We’ll be changing the cast iron waste lines to PVC, and we’re changing the lead pipes to pretty copper lines.  Everything is getting an upgrade when possible.  We’re stubbing in a second bathroom in the basement (to be finished later when funds allow).  But it makes sense to add in any potential infrastructure now while we’re here instead of coming back in 5 years to do the same thing all over again.

When I say *us* here, I mean the plumber.  heh  We don’t have that kind of skill, but we’ll be assisting him when he needs us to.

We’re anticipating having to do some more digging in the remaining back section of the basement, near the sink – but this will be done after we hear back from the plumber on where we need to do the remaining digging.

Come to think of it… I haven’t shown you our kitchen at all!  I post all the time on instagram of the progress… blogging is a bit harder to keep up with in the midst of everything.

These are a few shots of the kitchen demo we’ve been doing. 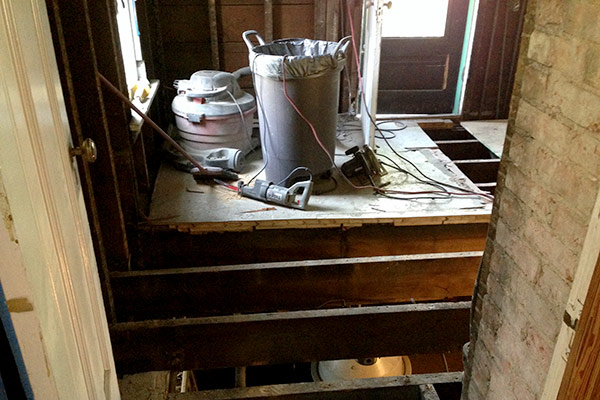 Everything is down to the joist spaces – above, below, and all sides of the kitchen.  I’m getting pretty good at walking across them – but we do have a few sheets of plywood down for walking ease by the back door. 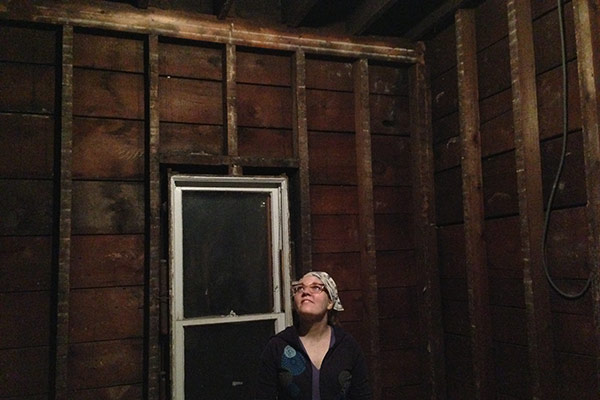 Side Kitchen wall – where the stove will go: 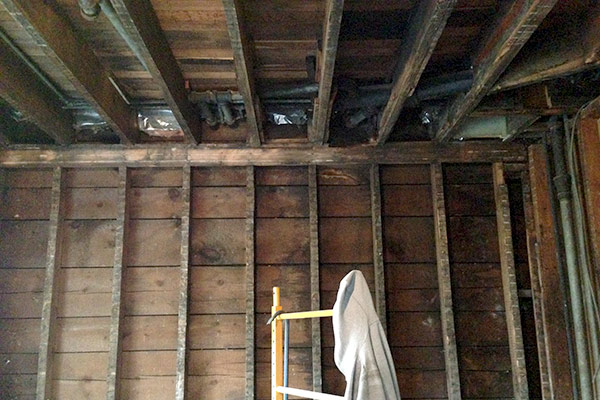 Plumbing lines are overhead feeding the upstairs bathroom and also on the far right for the half-bath on the first level.

Having everything torn down to the joists means the plumber will be able to lay down the lines – easy peasy.  He’ll have absolutely nothing to work around which should reduce the time he spends – which means we’ll have lower cost.  :)  A definite win-win.

After the plumbing comes new electrical lines run – when needed (by licensed pros obviously).  We’re focusing on the kitchen first then the remainder of the house will be done.

Yay infrastructure.  There’s nothing like starting from scratch on building your dream kitchen.  :) 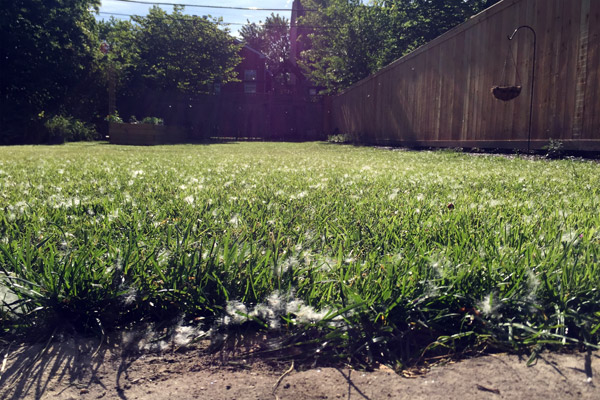 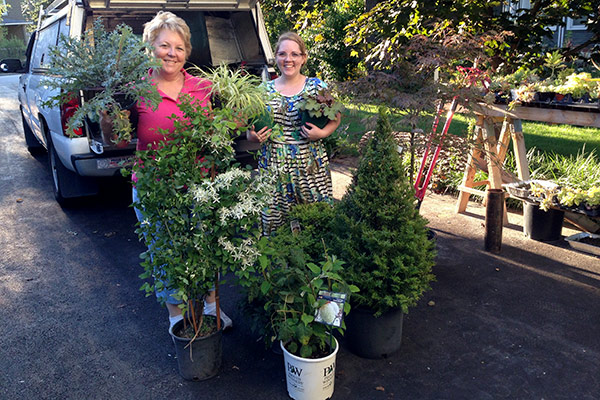 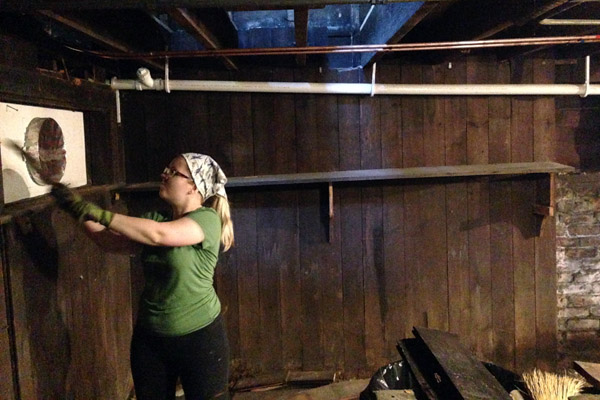