Everyone… this is Phineas aka Finn. 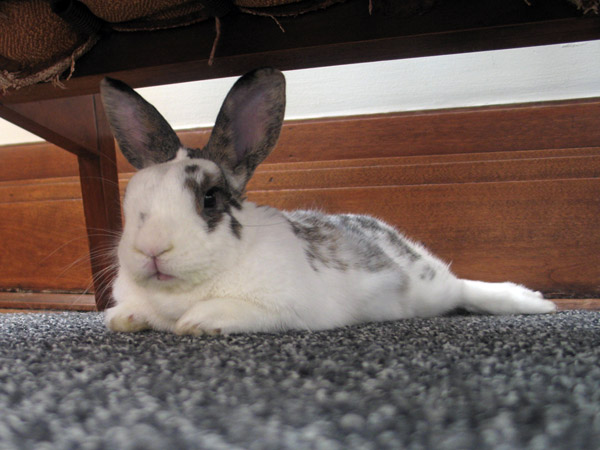 I’ve been on such an emotional *high* after bringing Mr. Finn home, it’s been great!

But let me start back at Wednesday night.

On Wednesday, Felix, Quincy and I all headed to Red Door Shelter to do the first round of speed dating.  The long and short of it is putting Quincy in a pen and bring in the other bunnies one by one to see which ones he gets along with.

Quincy is soo chill and relaxed that he honestly got along with all three of the bunnies we introduced him to: Gum Drop, Zelda, and Cowboy.  Cowboy was my new number #1 bunny choice so I was thrilled that he was getting along with another boy bun.  (It’s more difficult to bond two makes than it is with a male-female mix… or so I heard). 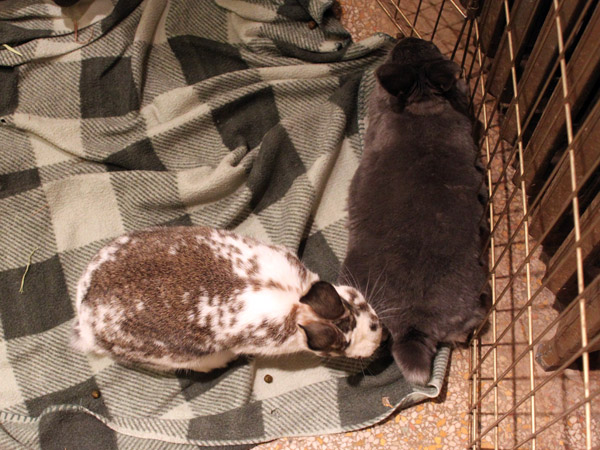 We left each of the three buns in with Quincy for a good 20 minutes (or more).  We ended the evening with Cowboy and after 45 minutes we knew we were taking him home with us. 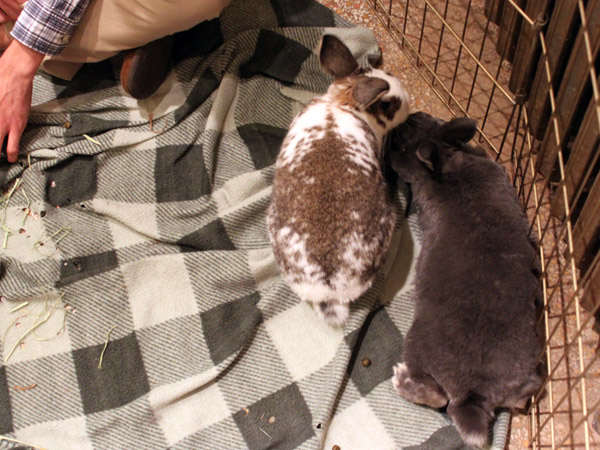 In our minds, as long as they didn’t fight we could bond them together.  They had a small spat about the littler box, but it wasn’t a deal breaker.  After a bit more time at the shelter they were even “okay” with sharing the littler box. 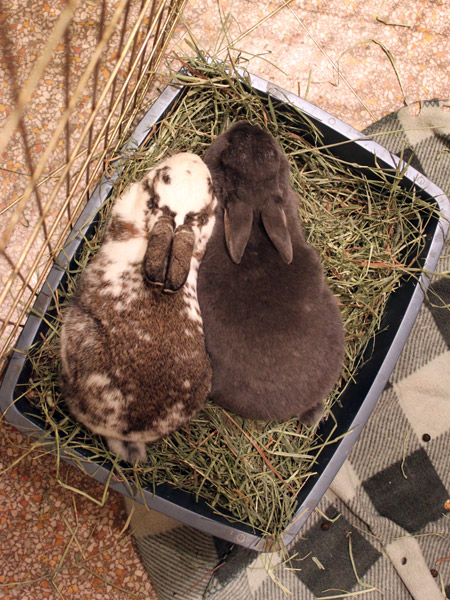 Cowboy on the left, Quincy on the right.

We were so happy to tell Red Door we were nabbing Cowboy and we took him home right away on that same Wednesday night.  I didn’t need any more time to decide as I fell in love with him as soon as I met him the prior Saturday.

We got home pretty late that night and just had enough time to feed ourselves dinner and set up a temporary home for Cowboy until we got him bonded with Quincy. 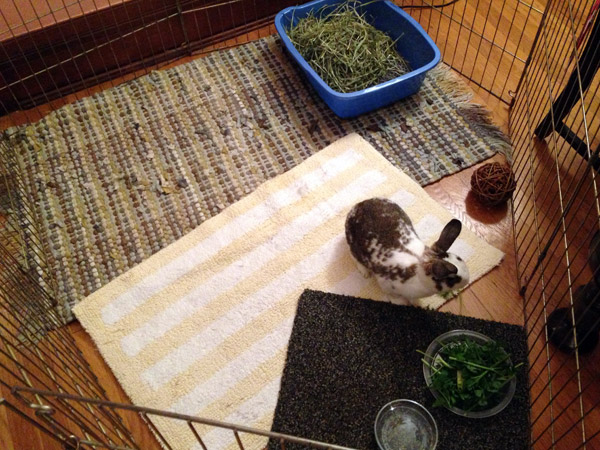 I reluctantly went to work on Thursday… and my boss was kind enough to let me take a vacation day on Friday, with such short notice.  heh  I went to the fabric store in the morning and then hung out with the buns the majority of Friday when I wasn’t sewing.  Perfect day!

On Thursday night I decided to start the bunny-bonding process.  Bonding is a process to get the buns buddies for life.  You have to set up a very small, neutral space for them to be introduced.  The house (as it was) is Quincy’s territory.  By introducing another bunny you want to do it in the neutral territory to put them on equal footing.  From here they have displays of dominance.  It can get quite rough.

When I was bonding Baxter and Quincy, it took over 3 months (with many bonding sessions each week.)  It was a really long process, primarily because Baxter was so sassy and wanted to be the dominant bunny… although Quincy won that title in the end.

I picked my front hallway as a neutral space.  I put in some clean rugs/towels and barricaded them in.  You can see we have very tight quarters here. 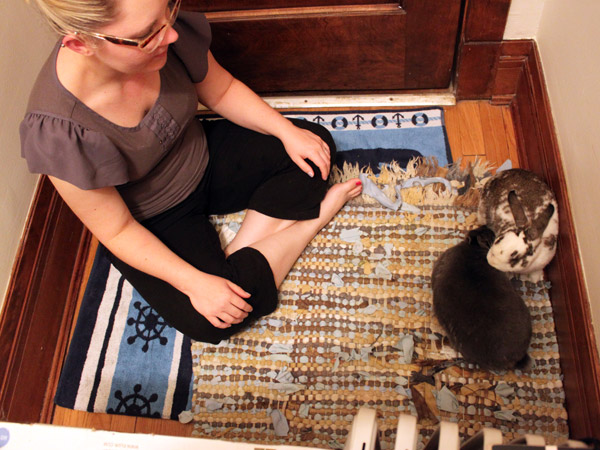 Quincy’s head is below Finn’s as he’s making a play for Top Bun status.

Quincy did good, but Finn was doing some major dominance displays.  Finn was nipping at Quincy’s heels when he hopped around and I also got sprayed with pee (as did Quincy) – not once but TWICE.  It was not fun and I still have some emotional scars from it.  :|

This first bonding session lasted around 45 minutes, which is a pretty long time for a first session.

As I was home all day on Friday, I decided to do two more bonding sessions: one in the early afternoon and once again in the late evening.

The early afternoon session went much the same was as the prior evening.  Finn kept nipping at Quincy – and it was my job to try and curb this behavior as it was just jerky.  As soon as I put Finn in the room, he peed on the floor.  *Ugh*  But at least it wasn’t an attack-spray-pee.

I was ecstatic when Finn started grooming Quincy!  And a bit later Quincy groomed Finn not once but twice!  Grooming is THE sign that they’re on their way to becoming the best of buddies. 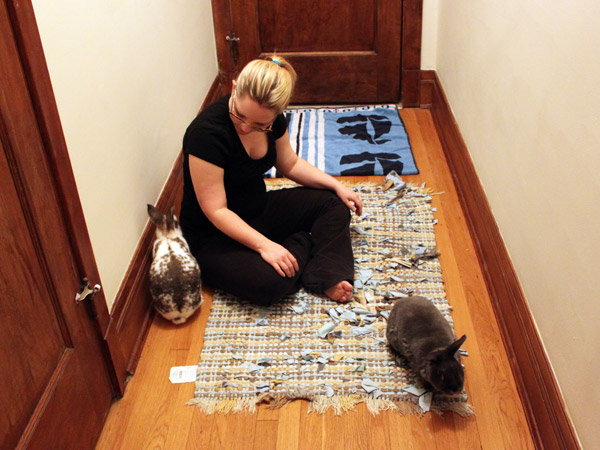 The evening session went a bit better.  I gave the buns a bit more running room.  Finn apparently got bored and did an attack pee on me/Quincy once again.  I guess he just wanted to see my horrified reaction!  Then once Finn calmed down, there were synchronized cleaning sessions and then Quincy groomed Phineas.  *Woot*

While the buns were okay I was pretty fed up with being peed on and dealing with Finn’s nipping, so I put each bun back in their respective areas.  They were with each other for a bit over an hour.  Again… doin’ pretty good.

Now… I know this sounds like an ordeal, but no major fights have broken out with the buns yet which is awesome!  As long as there’s no fighting and there is grooming the hard part is mostly over.

The fourth bonding session was on Saturday.  In attempts at preventing more attack-peeing, I washed the rug and towel and also relocated the buns to a different hallway.  I was hoping this with make it neutral again and Finn would NOT pee again. 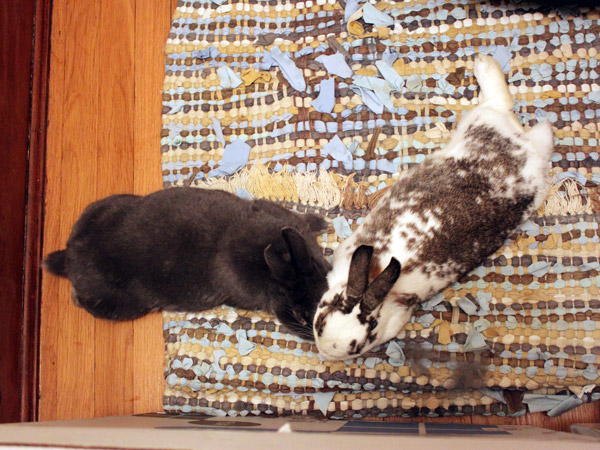 I sat in the hallway with my knitting and supervised the bonding.  One hour rolled into two… and so on.  I got tired after a while and took a cat nap with the buns.  Felix then took over for me and he promptly fell asleep in the hallway as well.  It was nearing 4 hours when I was like… are we done?! Are they bonded??

All I can say is in record time, Quincy is bonded with Phineas!  It took 3 days and 4 bonding sessions to get these two buns together.  It’s due to the fact at how relaxed Quincy is coupled with the fact that he was pretty desperate for a new friend after Baxter passed away.

We put Finn in the sun room with Quincy on Saturday night.  I can’t tell you how happy Finn was as he was zooming all around the room and checking everything out.  I don’t think he’s ever had so much space before.  It was heartwarming to see him so happy. 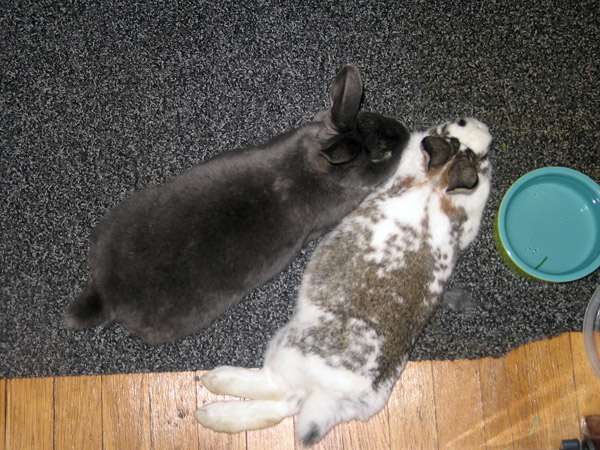 Phineas aka Finn (previously known as Cowboy) was the one rabbit I fell in love with as soon as I met him.  Yeah… I did love Gum Drop and Zelda and Fancy Pants too.  But not as immediately as Mr. Cowboy, and as soon as I met him he became #1 bun.  Despite my doubts about bonding two males they got along quicker than I could have ever imagined.

I nabbed this picture on Sunday as he was falling asleep underneath a chair in the sun room (aka bun room). 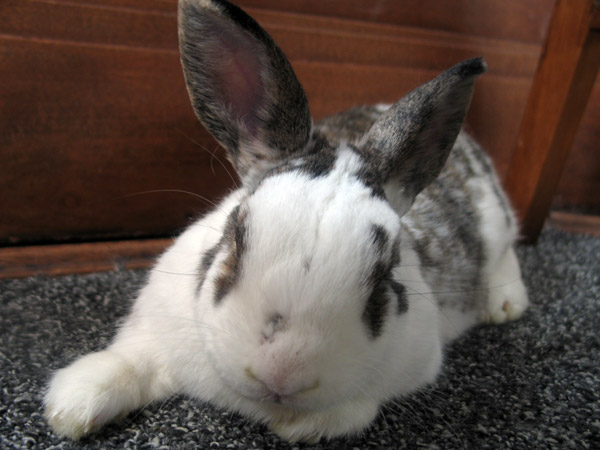 Quincy and Finn are now officially bonded and they’re so cute together.  Every now and then Finn nips at Quincy’s heels, but they’re working it out.

Felix and I were chatting about our decision to take Cowboy/Phineas home the other day.  I think we could have gone with either Zelda or Cowboy alike since these ended up being the two best matches for him after speed dating.
All around, Cowboy was the best choice for us (and also my first choice).  With his EC disease, it was most fitting that he came home with us since we’re so familiar with his potential special needs, both now and in the future.  Quincy’s (borderline) EC hasn’t kept him from having a full, happy life and I hope the same will be said of Phineas.
Thanks so much for all of your kind words last week as I agonized over Quncy’s EC issues and finding the perfect, forever bun to take home.  As you can see, it all worked out for the best in the end.  :D 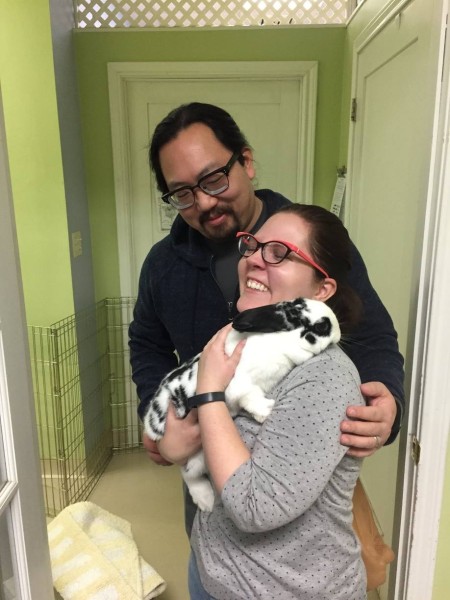 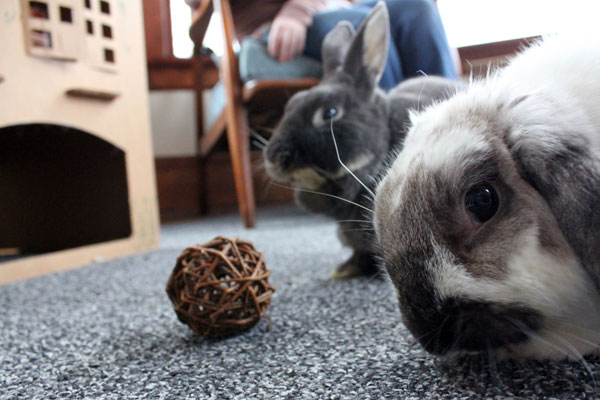