I can’t tell you how excited I was to start in on the outer collar.  It made me feel like I was rounding the bend with the finish line in sight.  Plus the collar was going to be a fun challenge… 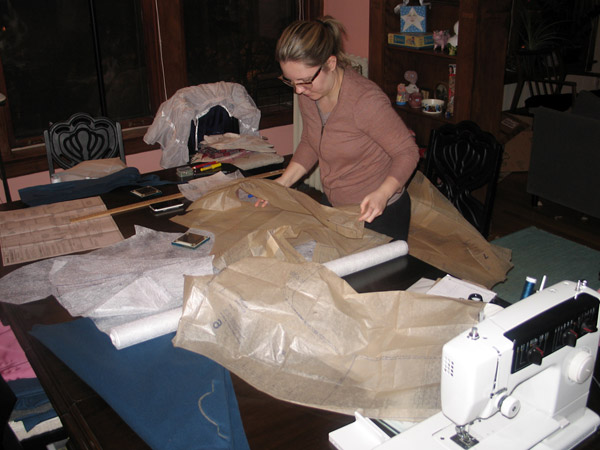 Felix nabbed this picture of me as I was going about tracing some bodice and collar pattern pieces.  What can I say… I work like a whirlwind (or perhaps it just looks like I do).  heh

First and foremost, I’ve had this image in the back of my head as inspiration for my own collar: 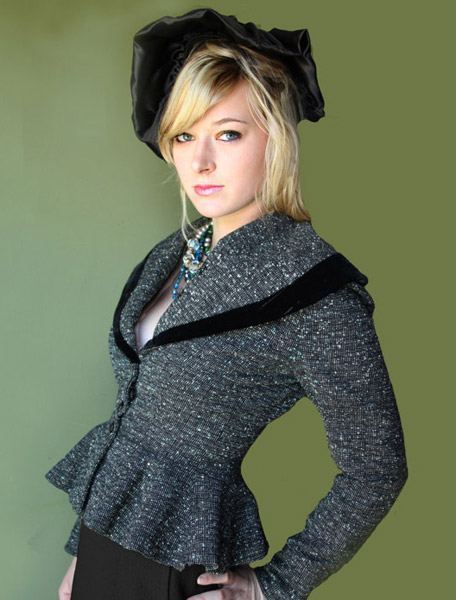 I love how there’s that wisp of contrast color, starting from narrower to wider as you approach the shoulder edge of the collar.  But instead of having the contrast at the very edge (consequently that’s how Gertie did hers as well), I wanted to have mine inset so you can see the fashion fabric at the very edge while the contrast was just inside that.

But how on earth can I accomplish such a thing?!

I debated cutting a curve of my charcoal contrast fabric, using the collar pattern piece as the template and sewing it in.  This seemed not only fiddly but also would entail a thicker outer collar with all of the seam allowances at the edge.  It would be 3 seam allowances if I went this route.  So instead I turned to applying the contrast piece on top of my fashion fabric, kinda like an applique.

After thinking about it some more and playing around with some waffle muslin, this seemed like it would work.  I felt this was going to be the best option since it would enable me to physically manipulate the fabric width (& length) after laying it on the outer collar as I saw fit.  If I went the pattern/sewing method I’d be having to sit down to the machine to stitch-unpick-restitch this area multiple times (many many times!)

As I was doing all of this my husband swung by to ask if I was documenting each and every step for you guys.  Sadly, I said no….  Since I was really ‘winging it’ as to how I was going about each and every step of the contract collar process I didn’t really know what to photograph and when since I didn’t know the steps until the very end once I had the collar all done.

So if you’ll bear with me, I’ll show you a few pictures and describe it as best as I can.

First, I cut a 2″ strip of waffle weave muslin and placed it around the outer collar.  I did so to give me a good sense of not only the width of the contrast fabric but also of the placement; how far away from the collar’s edge to place the contrast strip of fabric.

I decided that 2″ was a perfect width at the back of the neck and I had to taper it down to 1/2″ at the bottom edge of the collar.  But… what I did differently was to keep the 2″ width for 14 total inches before starting to grade down to the 1/2″ width.

While this may seem easy-peasy, let me tell you it wasn’t.  Not only was it tricky to cut the fabric since it was on the bias, but I didn’t cut the fabric at a straight angle.  To create the wispy-like appearance I had to keep the curve in mind and graded it bit by bit.

This image just shows the placement of the outer edge of the contrast fabric. 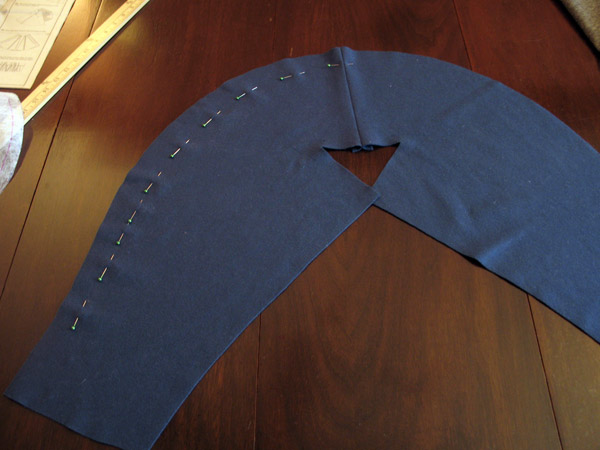 After I did all that, I started pinning the bias, contrast strip to the outer collar. 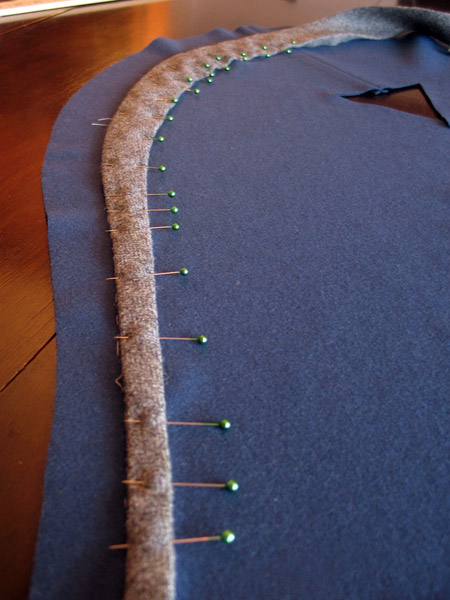 I started pinning on the outside of the contrast fabric strip, working from the center back of the collar down to the front waist hem.  Then I pinned the inside edge, easing in the fullness from the curve. 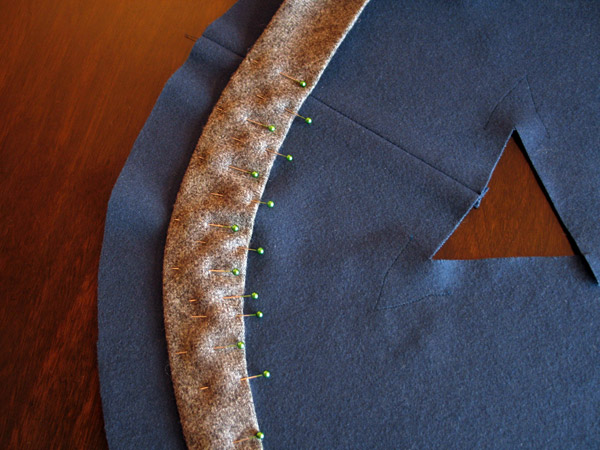 You can see how bubbly it all is. 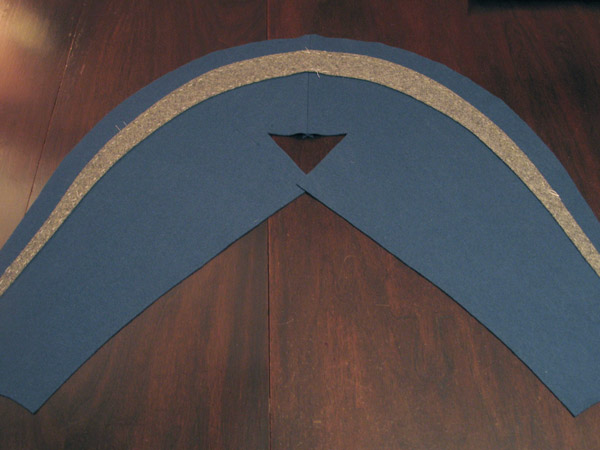 A bit closer to see my mini basting stitches: 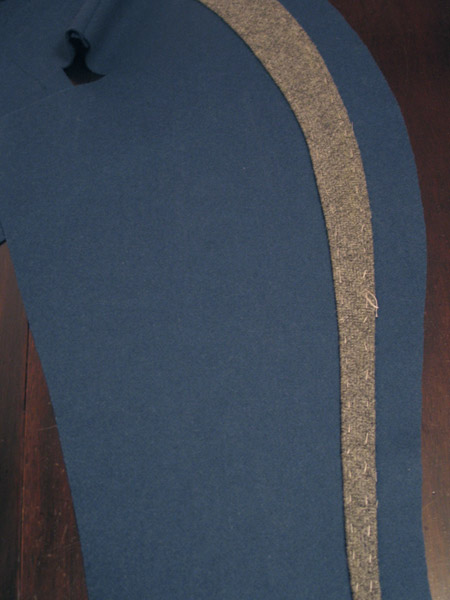 See how nice and flat it finally got?!
After all this I slip-stitched the contrast fabric down by hand, on each edge (while watching Pretty in Pink).
This is a total aside but my favorite scene in the movie is when Duckie lip-sings to Otis Redding. (Click to watch it on Youtube, for your enjoyment).
Back to the collar… 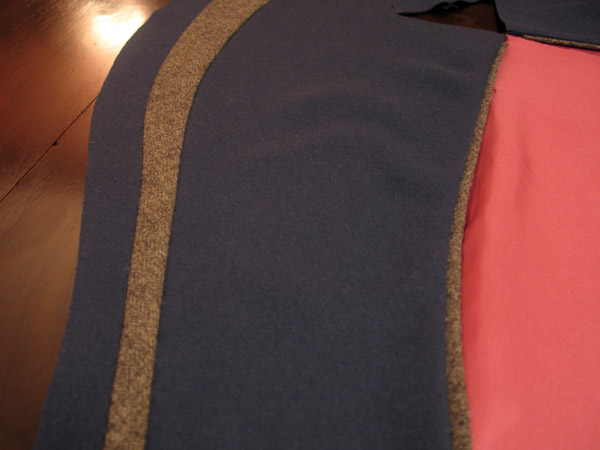 All of my other images of the collar were out of focus (due to the poor lighting in my apartment in the evenings).  But here’s a sneak peek of the collar after I stitched the front bodice lining (and another bias strip of contrast grey fabric) to the outer collar.

I’m hoping that I can get one bullet point item done each evening and that I finish my coat by the end of the (upcoming) weekend.  I don’t want to kill myself with this coat, but I’d also like to wear it at least once before it gets too warm out. 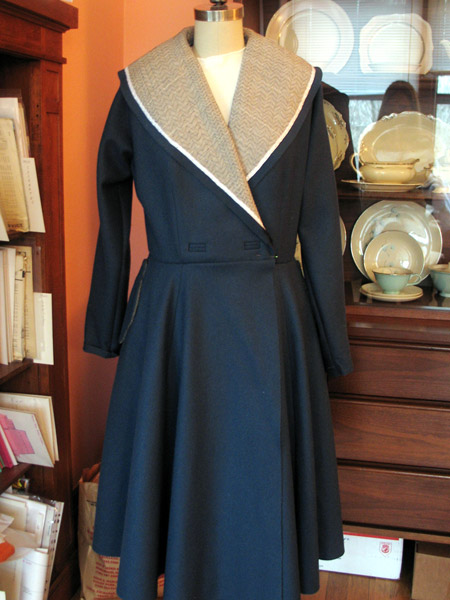 Work in Progress: The Gertie Coat

Pocket Detail on B5824 Coat 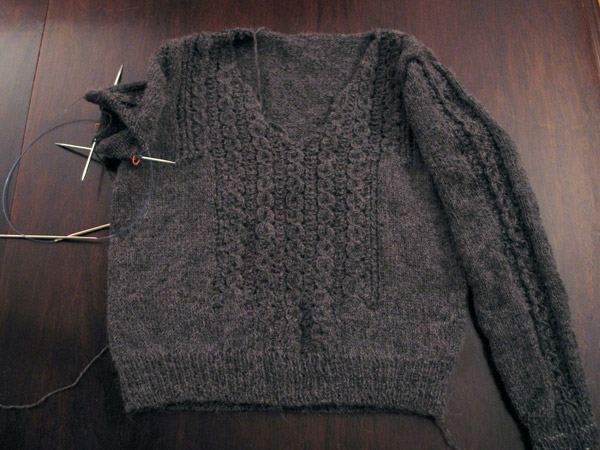 What’s on my Needles