Can you believe I have another finished item already?!  Truthfully, I’m actually quite astounded at myself that I’ve been able to finish up so many projects so quickly since the beginning of the year.  I usually leave stuff sitting around, patiently waiting for their hems, while I’m off starting another project.  So far, I haven’t even been stressed out about finishing anything either.  Perhaps it’s just the idea of Sewing Weekly that has motivated me to work on projects from beginning to end before starting the next one, which means I’m able to get more done in the same time frame.

Last week’s theme at Sew Weekly was ‘Made This Look‘.  Basically we were to recreate a garment either based on one of Mena’s Features from Make This Look or we were to pick one of our own.  As some of you may know, I have loads of inspiration images on my Pinterest account, so I was not short ideas for potential outfits to recreate.  The one I ultimately decided on was the Bardot Dress from Talbots. 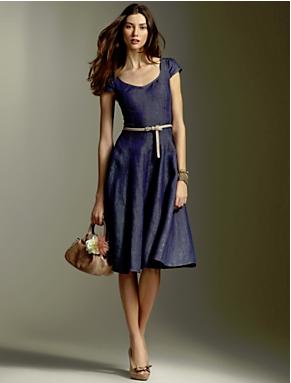 I saw this dress last Spring and didn’t purchase it since I had a hunch I could make it instead.  Granted, I feel that way about almost all dresses now unless I’m buying it for the fabric (along with the design).  Anyhoo…  I had the notion of buying a light weight denim fabric when I was at the fabric store forever ago, and it’s been languishing in my closet ever since.

Being doubly motivated to use up fabrics from my own stash along with the current week’s theme on Sew Weekly, it was the perfect pairing and I got happily to work on recreating this dress. 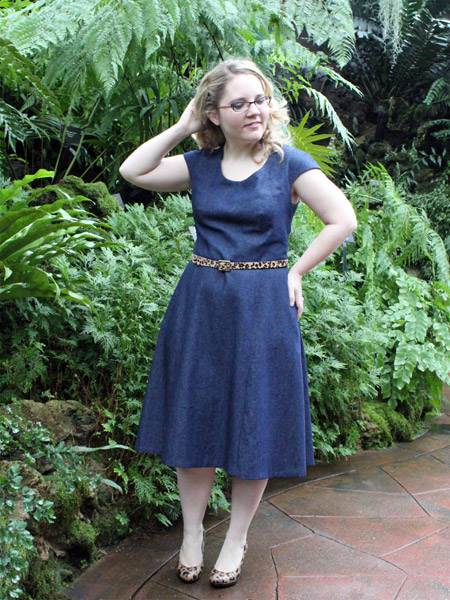 For the bodice I used BurdaStyle’s Pattern 02/2011 Dress with Gathered Rectangle Skirt and Cap Sleeves: 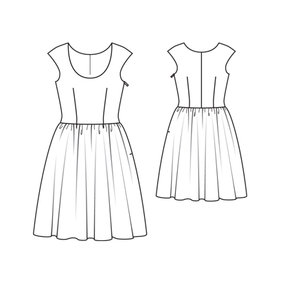 I altered the bodice slightly by raising the neckline (a fat 2 inches) and I extended the cap sleeves further down for a bit more sleeve length (around 1″ to 1.5″).

But for the skirt part, I used a pattern from my stash Vogue 7345: 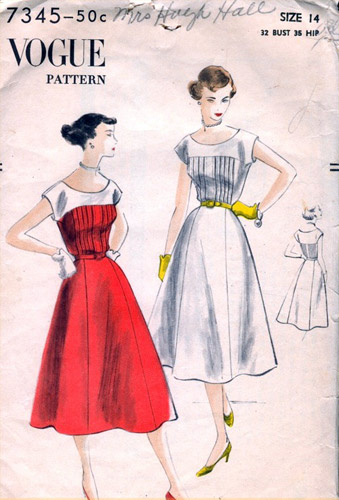 I choose this skirt due to the fact that the style lines are closer to the original Bardot dress than the basic rectangle skirt was from BurdaStyle.  But in looking at my images vs. the original Bardot, I think I should have used a circle skirt pattern instead.  Woe to me…. I guess I’ll just have to make another dress.  heh 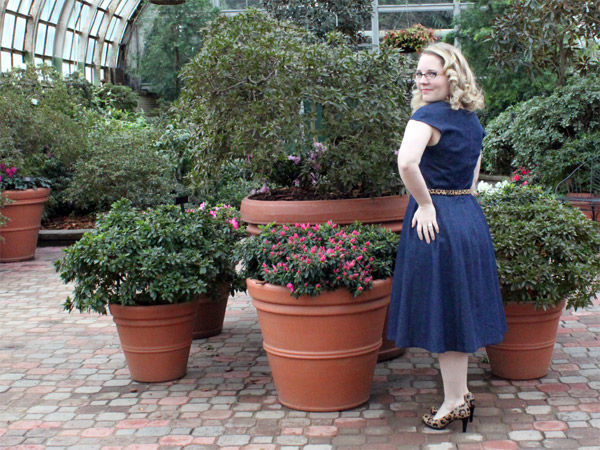 I paired my dress with leopard accessories both of which are having their first outing.  The belt I picked up at Target for a steal and the shoes came from Naturalizer.  I’ve been longing for a pair of leopard shoes and after at least 3 months of (buying and returning shoes online) this was the only pair that kinda-fit.  They’re a bit tight in the toe-box but I’m hoping in time they loosen up.

I tried a few new techniques on this dress with pretty good success.  First thing was that I lined the bodice (only) with a black cotton batiste, but I lined it to the edges.  So no facings, seam binding, or bias tape were used in the making of this dress.  As a result it has a super clean finish on the inside without sacrificing ‘structure’.  I got the directions out of one of my handy sewing books: The Spadea Sewing Book, A Collection of Sewing Tips by World-Class Designers.  The one caveat is that you can only employ the finish if you have no sleeves or collars to attach. 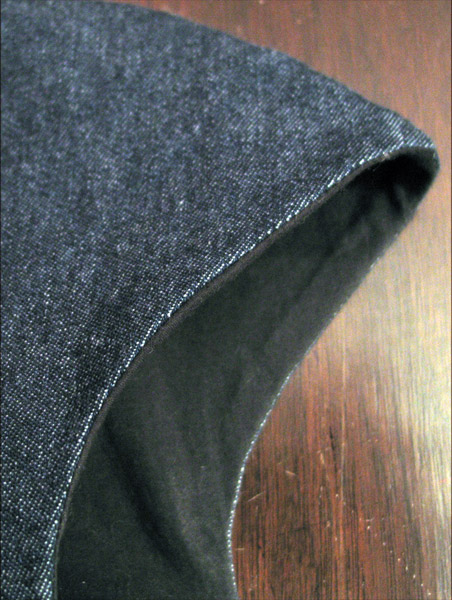 In order to prevent a gaping neckline, I inserted bits of silk organza on the front of the bodice neckline only using Kenneth King’s method, which I learned through the Crepe Sew Along with Gertie.  Unfortunately, I still had a bit of neckline gaping even after sewing the organza, which I’ll have to remedy the next time I use this bodice pattern.

And lastly, I did a slot-seam zipper insertion on the center back of the bodice: 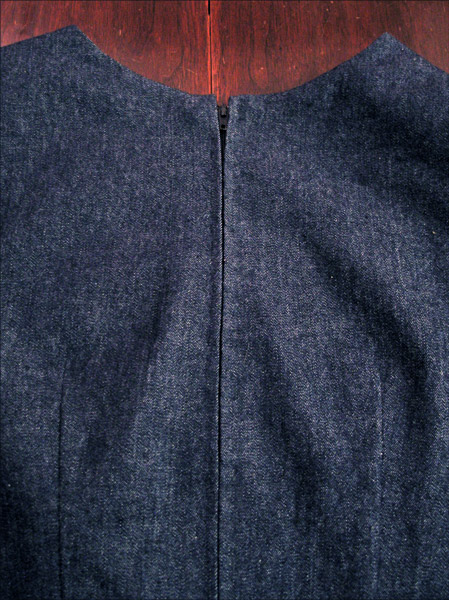 The slot-seam zipper looks great, but it sucks since it means I had to sew the zipper in, not once but twice (not counting my hand-basting stitches).  You sew the zipper tape to the seam allowance 1/8 inch outside of the teeth on either size.  And after that you do the regular pick stitches 1/4 inch from the opening. 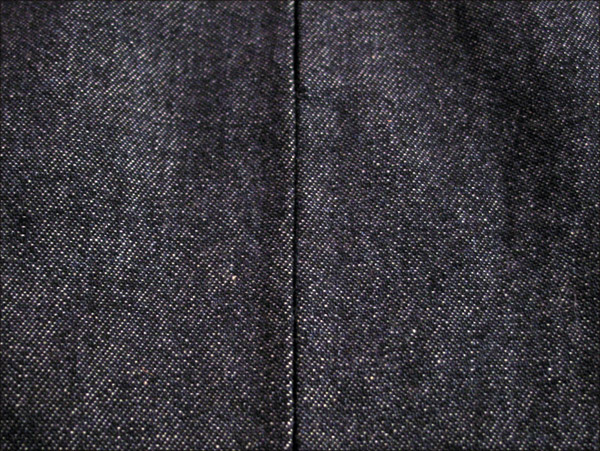 Pick-stitches…where are you???  I officially love denim fabric now, since you totally can’t see the pick-stitches I made.  Wooohooo!  They’re there though, trust me.

And here’s an image of the bodice insides: 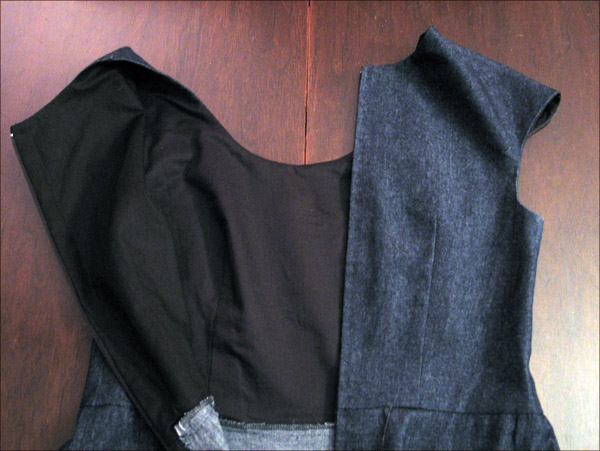 I love lining to the edge!  There’s so much less bulk and seam finishing to worry about with this method.  I’m using it on my upcoming valentine’s day dress, too.  And perhaps every opportunity I can from now on.

FYI: I’d be willing to do a tutorial on this if I have enough people wanting to see one.

Addendum:  Nearly everyone who’s commented so far has let me know they’d be interested to see a tutorial with this lining method.  I had no idea it would be so popular!  I’ll work on making up a tutorial for you the next time I use it myself (next 2-3 weeks).  Sound like a plan? 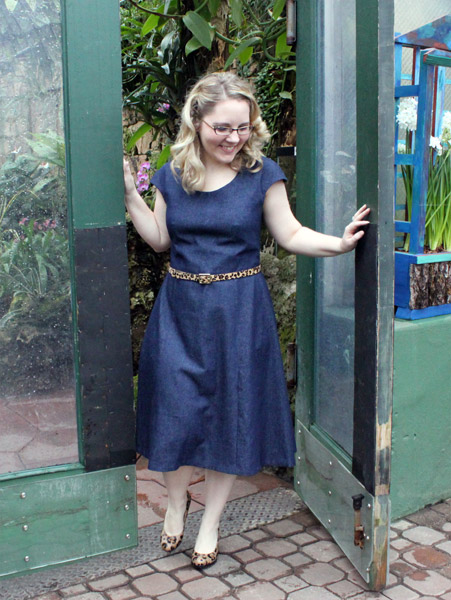 If you’re interested to read more about this dress, I have a whole different write-up (and images) over on Sew Weekly here. 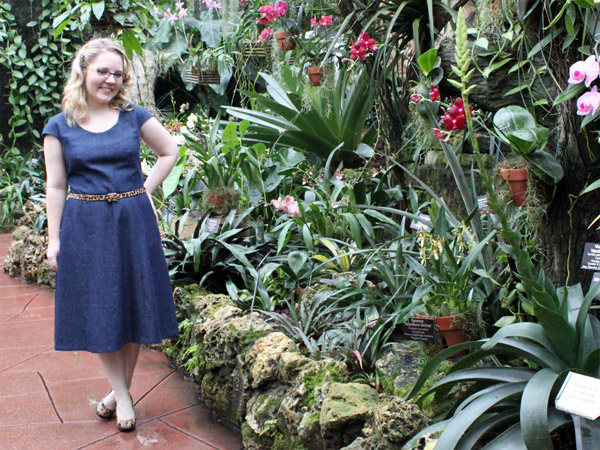 Happy Monday!  And if you haven’t voted for your favorite color combination on my next dress, be sure to vote by 5pm to have your say.  I’ll be making the winning combination and I’d like to get started in the evening after work.  :)