I’m happy to report that my Quaker Oats dress (aka the headache dress) is officially completed! 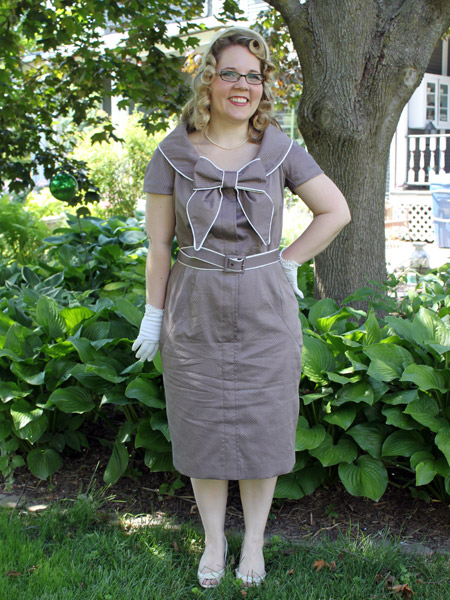 As a mini recap, this dress was supposed to be a Sew Weekly dress based on the theme of VIP fabrics.  Back in mid-March, I had three fab fabrics to use and you all voted to help me decide which to make; the majority (or 47%) of you picked the Quaker Oats A-2 Pattern along with this putty-colored cotton with tiny white polka dots on it.

I have had this pattern for over a year now and it’s one of the most expensive patterns I own.  I fell in love with the pattern and just had to have it!  Little did I know it was going to be such a pain in the butt to both fit and to sew.  Anyhow, I’ve been saving this pattern & fabric until I felt like I had enough experience to tackle it properly which is why I considered this polka dot cotton a VIP fabric.

I went down to the ‘burbs on Sunday afternoon and my mother was only too happy for me to take advantage of her awesome garden and take photos in it.  Looking at it, can you believe she’s not even near done yet?! 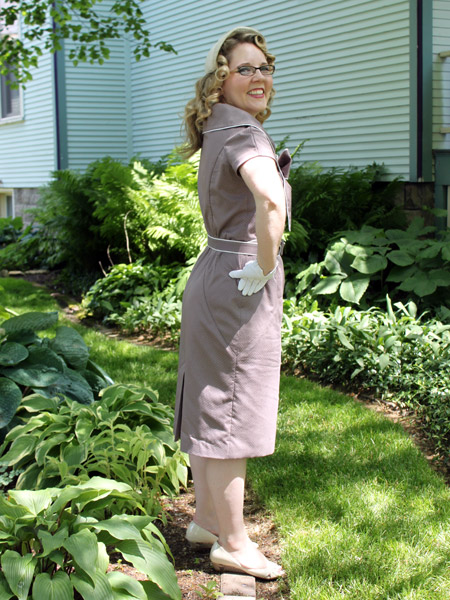 One thing I love about the dress is the subtle gathers that are on the back bodice of the dress; it’s deceiving but it’s not the belt that is creating the gathers, it’s part of the design.

Another subtle design feature is the back hem’s vent.  It looks like it’s a normal vent, but it never actually opens up to expose skin, yet there is enough fabric in this ‘pleat’ to allow for comfortable movement. 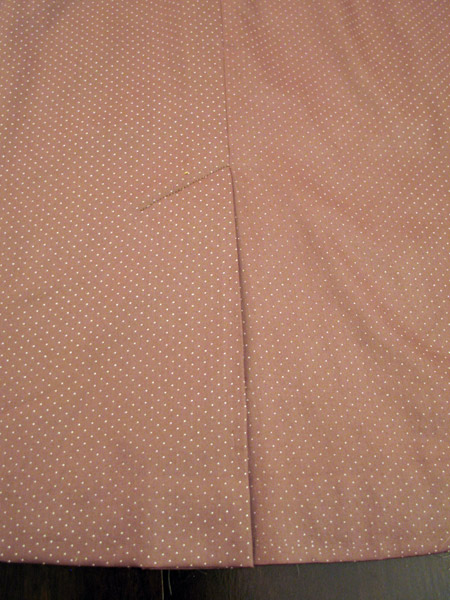 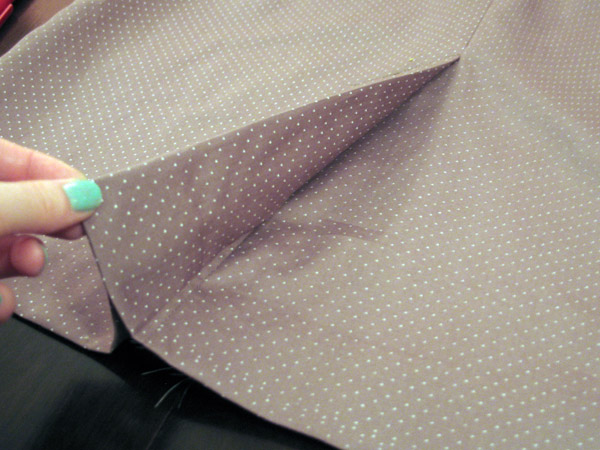 There’s a seam line right near the inner fold in the hem vent.

Here’s the insides of the hem too: 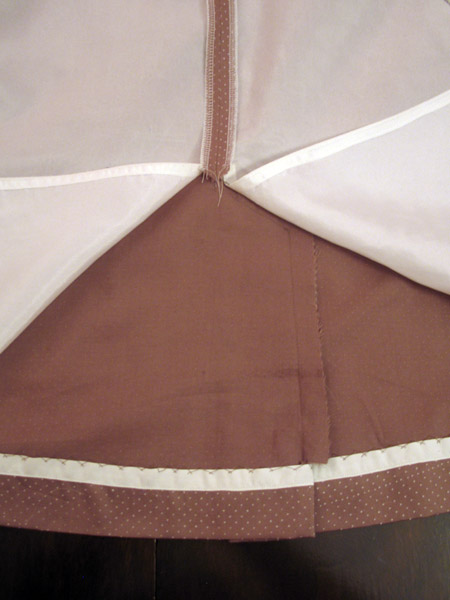 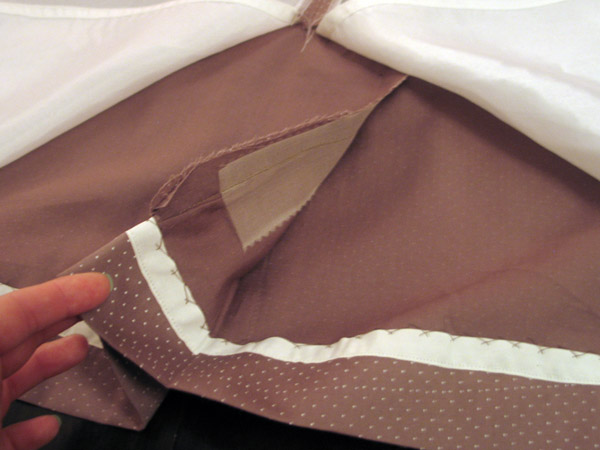 The main difference between this hem vent and others is that it’s just sewn shut.  I think I may be doing this from now on since I never need soo much extra walking room that it has to be open.

I was worried that the inset hip pieces would make me look like I have built-in saddle bags… but I don’t think it’s too bad.

For reference, here’s the pattern image (and note the hip sections): 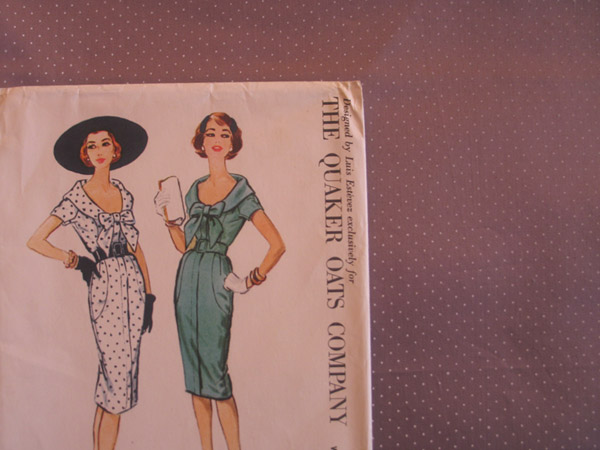 I know I’m already quite hippy (aka pear-shaped) but with the skirt tapering in towards my knees, I think it helps prevent against my hips being the focal point.  I also think it would look a bit more slimming if I had raised the hem another 1″ or perhaps I’ll just wear it with larger heels.  :) 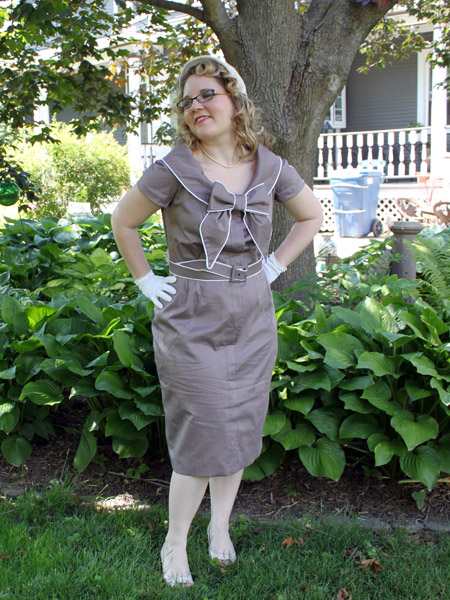 One thing that is not good is that my bow is weighting down my bodice.  You can see the center placket is drooping (bulging) out right near my bust area, I’m pretty certain that is due to the heft of the bow since it has layers of interfacing inside.

On my mom’s front porch: 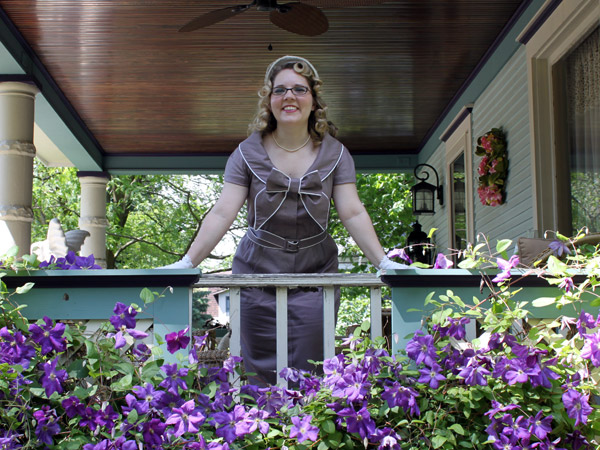 This is the house I grew up in which is well over 120 years old at this point.  My aunt Kathy was over and she was asking me why I like the 50’s (aka vintage) so much.  While I’ve always loved retro kitchens and 50’s furniture, I’ve only recently been trying to wear more and more of my vintage sewing projects which is heavily due to the fact that I can now make it myself.  But I think growing up around old things makes one appreciate & even gravitate towards older, similar things.

On many occasions, Felix has had the inclination to pack up and live in a high-rise building downtown.  Don’t get me wrong, the view would be amazing but it’s just not for me.  I’d rather live someplace that has ‘character’ and age; something with wear that shows it’s personality.  This is why I think I love vintage…  besides the style & fit.  :) 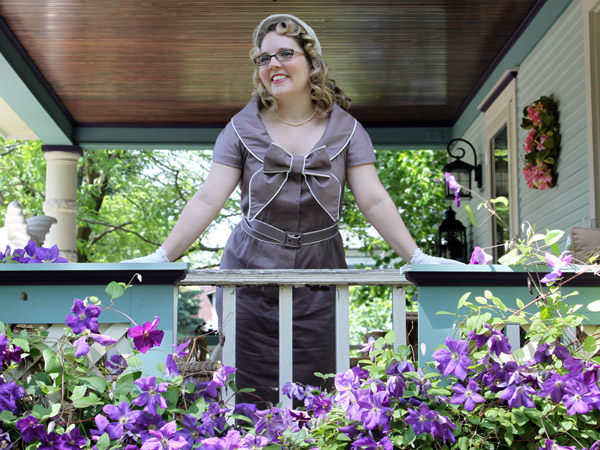 I debated including this image since it’s the same as the one above, but it’s a bit closer of an image that shows the dress better.  The more I look at this dress I looove the bow.  How do bows make everything prettier!?

Another challenge I had with this dress is the belt.  Normally belts aren’t too difficult, but I got the bright idea that it needed to have piping to match the collar and bow.  I had made a belt back in late March but it was not good.  I stitched the belt fabric close to the piping to make it look pretty, but as a result the belt casing got too tight and once I had wedged the belting in there, it was all wonky and bendy like.  Not good at all.

On Saturday night I decided that with the little fabric scraps I had left to go and made another belt.  Again, I wanted to stitch closer to the piping, but I refrained.  As a result of the piping, the casing is still a bit on the tight side, but it’s not too bad this time and the belt looks quite decent.  The piping does make for a really great belt, but you’ve been warned!  :) 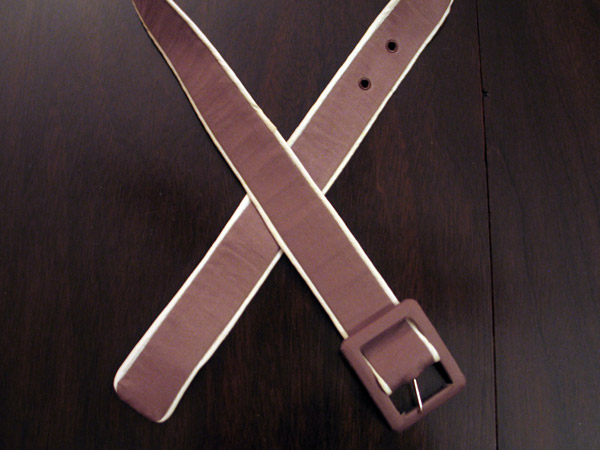 Nothing was easy on this dress!  I don’t want to bore you as to all of the headache details, so I hope all of the pictures below & my brief comments suffice as to the inner construction & closure methods.

True to form, I stabilized every possible stress point that needed it.  Silk organza is my best friend and has worked beautifully in this dress since the polka dot cotton was quite thin to begin with.  I put it in the placket and in the hem vent, and all down the center back seam on the skirt piece.

I used this weft interfacing on the collar pieces to give it some body without making it stiff.  And I used a white cotton batiste as underlining on the bodice but used a white bemberg rayon as a lining on the skirt (not as underlining).  Oh, and I nearly forgot that I also made my own bias binding out of the same polka dot cloth to finish the neckline seam.  (I was really glad I did this since the neckline is so wide the insides were liable to show…) 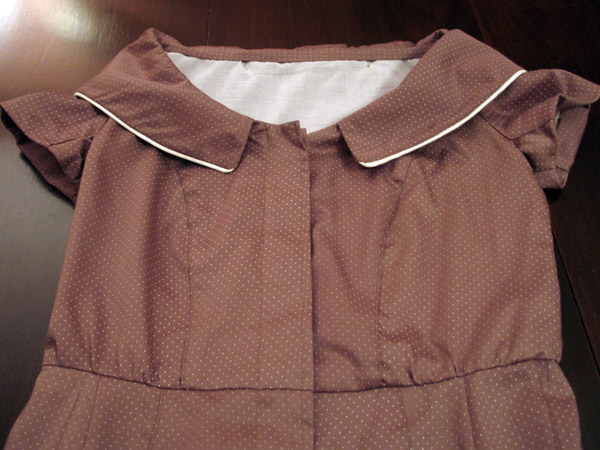 As you can see, I don’t have the bow attached here.  I’m going to put snaps underneath the collar so it’s removable.

Arm & Shoulder area, under the collar: 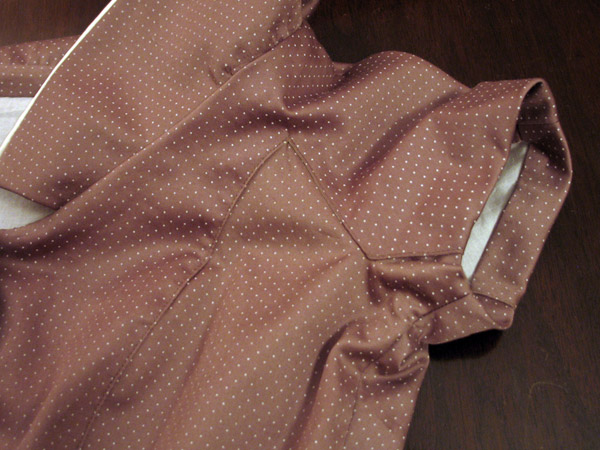 This is the bit that made the dress so tricky to sew and to fit:  the crazy inward then outward angle ending at the sleeve hem.  It ends up being a pseudo underarm gusset which is quite comfy and yielded a nice fitted sleeve. 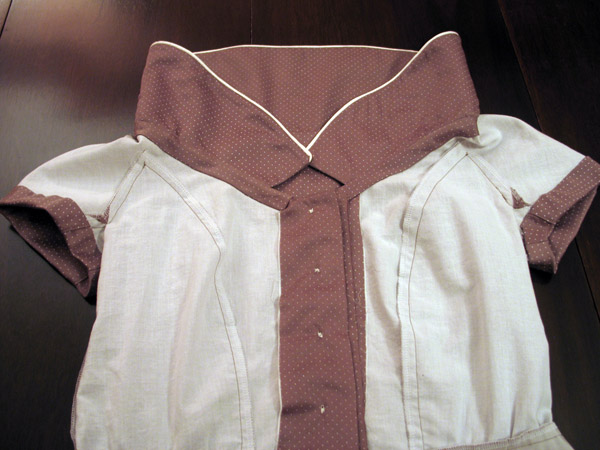 I was going to be all fancy and use seam binding on all of the seams, but it was too tricky so I just used my serger instead.

This is the detail of the inside arm area on the bodice,under the collar. 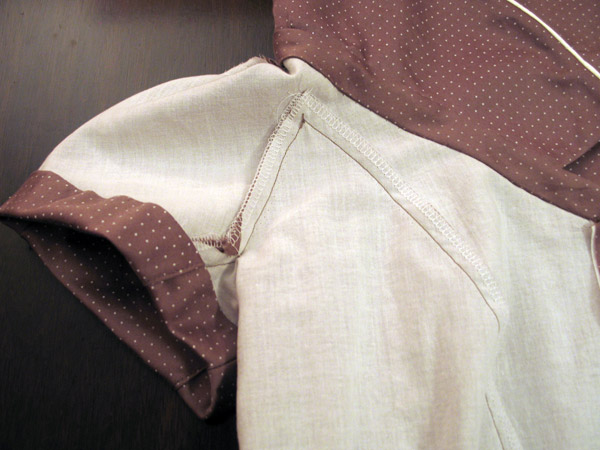 *Phew*  If you have any construction questions please don’t hesitate to ask.  I kinda breezed through that part kinda quickly today. 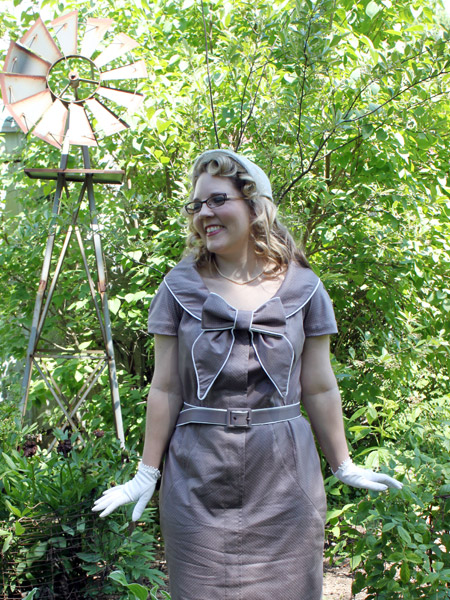 All in all, I do like the dress but there’s a few small fitting issues I need to address before I go and make a second one in green shantung (dart needs to be taken in at the hip & raise the waistline by 1/2 inches).  I’ve seen some similar dress variations based on this dress shape which I would love to try, but using this pattern as the base would be crazy since it was such a challenge.  I wish it wasn’t such a tricky pattern because I would love to make several more in different fabrics & variations.  I’m going to have to hunt in my pattern stash for something similar instead… 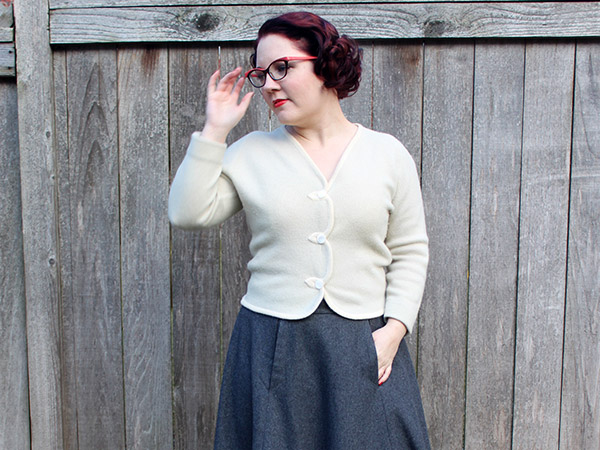 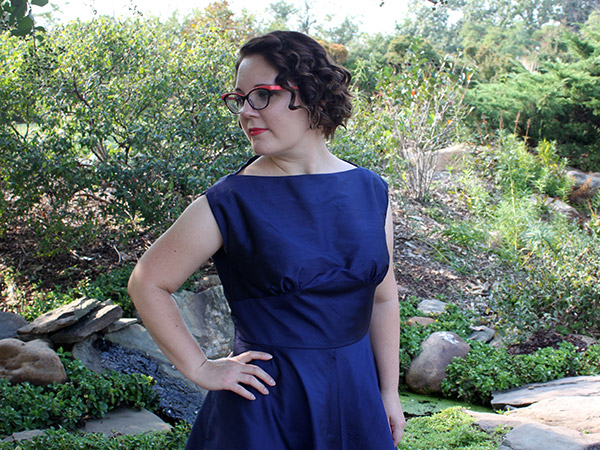 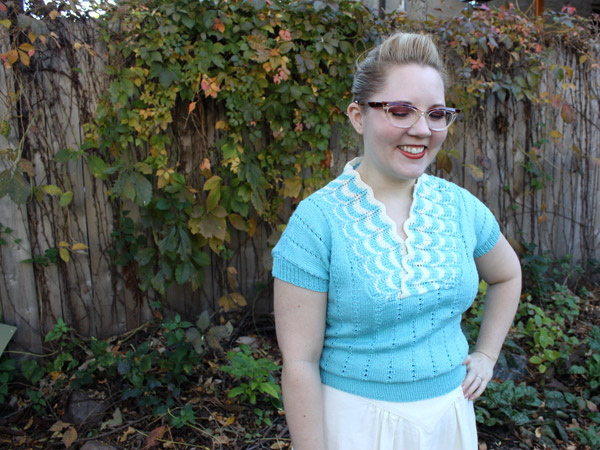