First things first, I don’t think I’ve ever mentioned that I’m in a local sewing club hosted by BurdaStyle.  We generally meet once a quarter at someone’s house and eat yummy food and chat about sewing.  But we did something a little different this past April. 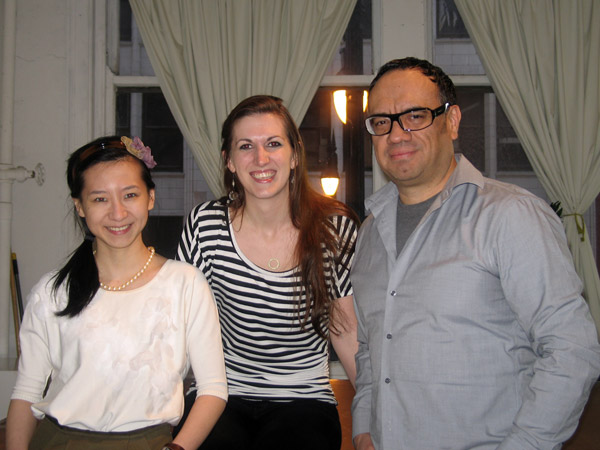 Orlando was very camera-shy and also wouldn’t allow me to take any photographs of his working space.  :(

Going there I had no idea what to expect since I’ve never been in an actual sewing space nor have I ever talked to a non-home sewer.  I left straight from work and got there ages before anyone else showed up.  I think I was there with Orlando for a good 20 minutes, just hanging out before Natalie and Allison arrived.  I was nervous but kept talking away about the (always) crazy Chicago weather and about flea markets.  I kept trying to talk to him about sewing stuff, but he wanted to wait till everyone else got there since we’d most likely talk about the same stuff all over again.

I’m writing this post nearly 2 months after visiting his show room, so I don’t have a ton of detail to share with you all.  One thing that sticks out most from my visit with him is how hard the economy has hit the independent operations, and especially fashion designers in Chicago.

Orlando’s loft space is in a once-thriving art neighborhood in Chicago, Pilsen.  Being a north-sider of Chicago, I am (and was) completely unaware that Pilsen (south-side) isn’t as hopping as it once was in terms of art.  Every 2nd Friday there is a large art walk where all of the area galleries would be open for viewing and shopping.  Orlando’s studio is right in the middle of this art walk and he used to get lots of foot traffic.  But in talking with him, he stated that’s not the case anymore and studios/art spaces are closing up shop all the time for the past 2 years.

He works in a really cool old building that was once a garment factory: think 1940’s and rows and rows of sewing machines on wood floors with huge loft ceilings and you’ll get the idea.  He has a large space on the 2nd floor of the building and there are a lot of vacancies.  I actually think he was trying to gauge if we were interested in the space, but from what I know he’s still there working away.

All in all, he seemed a bit dejected at how the area has slowed down but was quite happy to listen to us home sewers and our sewing escapades and gave us lots of real world advice.

A Few Random Observations from my Visit:

Just from visiting his space, home sewing is a ton different from industry sewing.  My (long for me) scissors are 9″ or 10″ and his are like 15″ or 18″ long.  They were HUGE!  I have no idea how he manages to cut small curves and angles accurately with those suckers.  I think I would end up with Popeye forarms if I had to work with them on a daily basis.

He cuts all garment pieces between brown craft paper.  I do know knits wiggle around, but he was very nonchalant about this fact.  This must be an industry norm, if I read him correctly.

Pattern Graders are hard to find and good ones are in demand.  Note to self: If I go back to school for sewing, become a pattern grader.  heh  Orlando said everyone wants to be a designer but not many want to be behind the scenes grading patterns.  Makes sense with all of the reality tv shows that have come out about being designers. 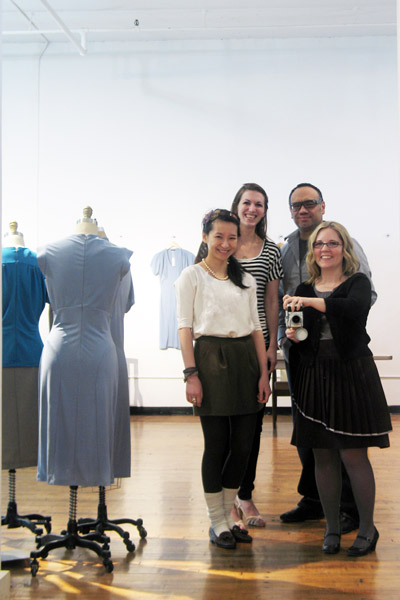 Being a home sewer is great, but it was nice to venture out and see how people are able to turn this craft into their livelihood.  I feel lucky that I’m able to be apart of an actual sewing group, meeting real people, even if it is only every 4-5 months a year.

This reminds me…. I have to get on task with a potential blogger meetup.  I’ve been thinking it over ever since I first mentioned it, so don’t think I’ve forgotten about you all.  Chicago has a decent public transportation system, but the fabric shops are no where near the public trains which makes organizing a meetup quite challenging.  You all will be the first to hear once I do a bit more concrete research though about getting from Point A to Point B.  :)