I’m not sure how, but its gone from a balmy 65 degrees to 25 degrees in Chicago.  I couldn’t take pictures outside of my Bouquet Skirt sans winter coat, but fortunately for me, I have a pseudo-summer retreat a mere 10 minutes drive from my apartment called Garfield Park Conservatory.  It’s always nice and hot and humid in the conservatory, and always manages to be sunny inside.  So Felix and I decided to drive on over there for an early Saturday picture fest as well as basking in the warmth and oxygen-rich air.

I really love any excuse to go there, and makes the cold, windy winters bearable.  The fern room is my absolute favorite area, it feels as though I’ve been transported back into time.

I used the Jenny skirt from Burda, and have altered the waistband to be a bit shorter. I’m short-waisted and I find that this is high enough for me; any higher than this and I don’t think you’d be able to find my actual waist. heh

Its a bit dark, but there’s a mini waterfall right behind me, that has goldfish in it. 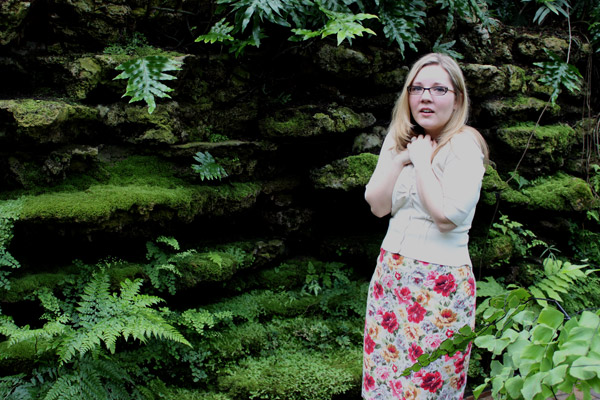 This is what I saw…

I’m trying to keep it mini since I don’t want to see it again.  I had the hardest time cropping this photo without trying to look at it.  heh

And this was just after the *terrifying encounter* when I was just laughing at myself.  Is anyone else deathly afraid of these bugs or is it just me?!  I think it all started with that clip in Willy Wonka’s Chocolate factory when they’re in the tunnel in that boat and they have an image of one of these guys crawling on someone.  Totally grossed me out and still does!  *Shudder*

And this is my shoe shot, which is just totally random.  I rarely buy shoes since it’s so hard to find shoes in my size (women’s 4 or kids size 2.5).  Yup, I have mini feet.  I’m really just excited that I actually found shoes that fit and look cute too, and had to share my ‘find’.

I’ve made this skirt once before, several months ago, but I decided I wanted to make up a new muslin since my shape has changed a bit.

My mods: I completely eliminated the front darts, because I was getting that hollow-look where they ended and instead I have lots of small gathers, which are nearly invisible (hopefully). To help reduce the amount of fabric to gather, I re-cut the front pattern piece to be narrower at the waist, and taper down to the hip where the dart would have ended; all while keeping the same hip shape as the back pattern piece.

I shortened the back darts about 1″, and I’ve significantly shortened the overall length of the skirt as well since I’m such a shorty.

I used The Cupcake Goddess’ tutorial on how to add a back vent as well as how to attach the lining, and also used her tutorial on how to insert the invisible zipper. I’ve done so many zipper insertions you’d think I’d remember by now, but I love having a site to reference just in case.

The one thing I’ve learnt though is to sew up the back seam of the skirt to exactly where the zipper will end. I’ve messed up so many seams in the back because I didn’t do that; for me it eliminates those little bumps that can happen right where the zipper ends and where the regular seam starts. I can’t remember the site I got that tip from, but I do that now on most of my clothes with zippers.

Also I always reinforce the entire back seam, the whole way down, with silk organza instead of just at the zipper or just at kick pleat. I think it makes the seam look crisp and if you were to start and stop with the organza, the middle would be a bit looser than the top and bottom of the skirt.

The downside of this skirt, is that I can’t wear it yet; the weather is still quite cold here in Chicago (30’s and 40’s) and I think it would be silly walking around in a clearly-springy skirt with tights and winter boots. Oh well, it will make me look forward to spring/summer, all the more.